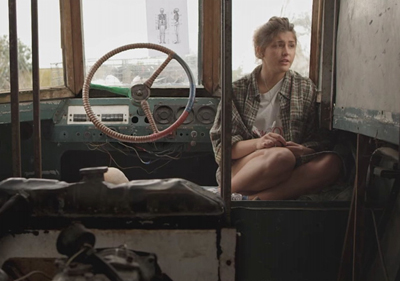 “Volcano” is Roman Bondarchuk’s love-letter, elegy and eulogy for a way of life altered by the effects of modern technological and economic change – in this instance a Ukrainian village which had previously existed under the flooded reservoir it now calls its shoreline. It is also a contemplative, funny and heartbreaking hundred minutes of beautiful vistas, loving apparitions, interesting characters and fish-out-of-water irreverence.

In short, I loved it.

But, to be clear, “Volcano” is slow-paced and meandering, purposefully taking its time to both tell its story while showcasing a world known only by the few that live within it. In that way it is exactly the kind of film that makes the Chicago international Film Festival so special since one of its driving goals is to illuminate other cultures and their rhythms, traditions and stories. But that doesn’t mean it will be for everyone. If you prefer your films to rely on plot twists and turns, or action, this is probably not going to be for you. But if you want to witness the brilliant vistas of the never-ending Ukrainian Steppe, the understated nature of a community that exists with an economy of words, or the longing for connection or peace, then you could do a lot worse.

Serhiy Stepanski, as our fish, Lukas, has a wondrously permanent expression of “wtf?”. This allows his journey to be communicated in extremely subtle ways, as is necessary for a story of this type. And Viktor Zhdanov, as the irascible patriarch, paints an extremely human picture of both the effects of change and the adaptability of those who have no choice. The two major female actors in the film are also terrific. The matriarch (played by Tamara Sotsenko), while stock, is hilarious and an important piece of the puzzle. And, finally, Chrystyna Daylik’s Marushka, representative of how youth exists in this world, is both three-dimensional and the perfect Siren to Stepanski’s Lukas.

Vadim Ilkov’s photography is spectacular, as it must be given the extremely flat surroundings. And Bondarchuk’s use of minimal locations and settings (which effectively work in service of the story) makes Ilkov’s cinematic challenge even more daunting. That it is Ilkov’s first feature is astonishing.

Alas, while my notes (and memory) do not describe the music of Anton Baibakov, I remember being pleased by the sound-beds and making sure I sought out the composer’s name in the final credits. And the choral music is deliciously placed.

“Volcano” may have not been the best film I saw at this year’s Fest, but it would surely be in the Top Five of my favorite experiences.