An interesting crop of short docs this year. Not nearly as devastating and life-devaluing as last year (with the notable exception “Joe’s Violin”). And, not for nothing, all uniquely American films. Nonetheless, very affecting, moving and…ultimately hopeful. Four focus on the consequence of America’s greatest health and cultural issues, and one which traverses that river when seen in context of Big Pharma. All are very well-made. Mostly they keep your interest throughout, and, naturally, they each have their own set of problems (ie none of them are as perfect or emotionally affecting as last year’s “3.1 Miles” or “The White Helmets”).

Which led me to come away wondering why the choices were so insular this year. Have we tired of the refugee crisis? Wars in other lands? Historical forays in to the root causes of the world’s issues? No longer find unique and interesting people of an international background to be worthy of examination?

Alright…soap box placed back in the closet…here are your five nominees in alphabetical order.

I like my docs to have a sense of fairness about them. In other words, if you’re going to paint a particular picture of a person or entity, give me, the audience member, and them the accused, the courtesy of letting that person or entity defend themselves. We’ll know if they’re full of shit. “Edith + Eddie”, a doc that might have been better served as a strict love story showcasing the connection between a married couple made up of two ninety-five-year old people, or the manner in which their bi-racial coupling is welcomed in the predominantly black community they live in, instead turns in to a damnation of court-mandated power of attorney. Those initial elements are certainly present…it’s why you’re invested…

However, since director Checkoway has chosen to make this a three-act narrative doc, there must be an antagonist. So when bad things happen, we are basically instructed  how to feel about system and an allied sister loudly painted as motivated only by greed. At no point do they get to defend themselves. To be fair, perhaps they turned down the opportunity to do so. But instead of focusing on how these things affect the couple and their sincere love for one another, we are brought in to the fight. And, like an intrusive score, the director’s point of view is glaring and kind of patronizing. I’m sympathetic, but I would have been, regardless. All that said, everyone should watch “Edith + Eddie” – for their love, and their insights in to the very nature of love. And, yes, for the knowledge of what the legal system can do to any of us if it so chooses.

This front runner for the Oscar is exceedingly interesting…and exceedingly baffling. I couldn’t tell you what the director was hoping to tackle here. If it’s simply to profile an emotionally and psychologically tortured artist, then perhaps a minute or two of contextual background as to Mindy Alper’s place in the pantheon of American modern art would have been helpful. But I THINK it’s about the nature of how her various disorders and the possible causes (both via nature and nurture – but especially nurture) are at the core of her art. I don’t really know. Lucky for Steifel and us, Alper is an amazingly interesting and very sympathetic figure, so losing interest is never an issue. I just don’t quite know what we are supposed to make of it…and when you only have forty minutes to tell your story, that’s pretty important.

It’s still a valuable film to be sure, to be sure. Alper’s art, like Ralph Steadman before her, works very nicely in the context of her personal story. And Steifel’s inclusion of animation is fascinating….although it’s never revealed if Alper did the animating or if it was done by the filmmakers. I don’t know. You watch it and tell me what you think… 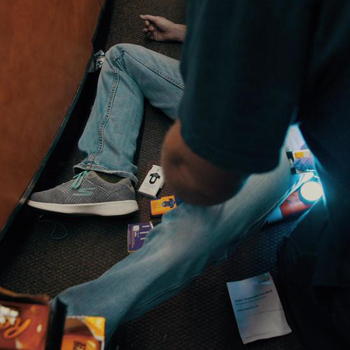 Easily the most complete film of the five, “Heroin(e)”, currently available on Netflix, takes a humane stance on the nature of our country’s drug crisis from the perspective of the addicted, and backs it up by following those on the front lines. The film is shot investigative style in a town with an overdose rate ten times that of the U.S. average. It is not about the horror, although there is horror aplenty. It is about empathy….care for human life, even if that life is a damaged one. Our heroes are three women, a judge (the Hon. Patricia Keller), a fire chief (Chief Jan Rader) and a concerned citizen who starts a very specific kind of charitable cause (Necia Freeman).

This lovely film about an ex-con who opens a French restaurant with Michelin star aspirations using only ex-cons as staff is very well executed. I don’t know how the restaurant will fare, but the film, which should garner serious consideration for the top prize, is inspiring, empathetic, and entertaining. In fact, I found myself wishing it had been a feature-length film.

The film revolves around the preparations for the opening of the restaurant while concurrently training the “staff” all they need to know to work back or front of house. Focusing its non-invasive eye on three of members of the first class of this school/restaurant, as well as a watchful camera on the founder of both the restaurant and the concept. what truly connects us to these people is their fully-realized sense of self-awareness, shame and regret, as well as excitement and new-found self-worth.

Full disclosure, I tend to gravitate to docs about the hospitality industry due to my years enmeshed as an employee in a variety of eateries, events and bars. And of these types of docs, nothing interests me more than the machinations behind the opening of a new restaurant. “For Grace”, which came out last year, and is currently on Netflix, is a terrific example of the genre. But while that film was mildly (to not so mildly) self-serving in its subject, this film, filled as it is with those overcoming the effects of incarceration, goes much much further. It’s available on iTunes for a couple bucks. To quote Tony Roberts deputy mayor in the original “Taking of Pelham 123″…

This powerful film from Kate Davis (currently available on HBO, HBOGO or HBONow) is an examination of Breaion King, a young woman who was the victim of police harassment and violence borne of racism during a traffic stop in Austin. In this film, the horrific event, recorded in full by the car’s dash-cam, acts as important context, not as the main subject. The film is really about the type of person Ms. King is and the manner in which the traumatic event has shaped her world since. Emotionally, this film never wavers in its ability to communicate.

However, the only negative thing I can say about the film is, alas, not a small one. The connection between Ms. King’s before and after is simply not well-defined enough…or, rather, not portrayed as significantly different enough to carry us through the narrative. Now, this says much more about the inner strength and determination of Ms. King than it says about Ms. Davis’ film…Ms. King is a truly inspirational figure.

BUT, if that part of the story doesn’t give us enough of narrative, we are left to fill in the gap. And, as a result, way back in the recesses of my mind, it kinda sorta felt like director Davis was saying, “see, this happens to grad-school educated black people too”, which utterly undercuts the true purpose of Ms. King’s organizing principle throughout, which is it doesn’t matter what ANYONE’S station in life is…if one person is subject to harassment simply because of the color of their skin, then that is one too many.

(Edit. note: I am absolutely willing to admit that this nagging feeling exists from the perspective of my white privilege – brainwashed as we white folk are to see demographics that define our stations in life at all times. But exist it does. Not everyone will get that out of the film, but I did – which makes it fair game for a film review.)

Regardless, this is as good a primer on the purpose of the Black Lives Matter movement as any. It is not sensational. It is not about mass protest. It is about how one person of color must constantly suffer the duress and consequence of living in a white-dominated America…even in a supposed “highly progressive” city like Austin.
______________________________________________________________________
So how would I grade these five films? Well, it’s a fool’s errand, since docs can’t be compared to one another in the same way fictional content can. But I can say that all should be viewed if possible, with the caveat that, in my estimation, “Heroin(e)” and “Knife Skills” were the only two I’d have wished to see made in to features…and thus the best executed of the five.