“On Body and Soul” (Hungary)
Directed by Ildikó Enyedi

Having already seen three fantastic Hungarian films this year (“1945“, “Budapest Noir“ and “Aurora Borealis“ – all reviewed here), one of which I thought was maybe the best film all year, I remember thinking, “well, if ‘On Body and Soul’, and not ‘1945’, is the Hungarian Oscar entry, it’d better be fantastic.” And, it is.

Stunning and emotional, it’s a very tough film. Or, rather, it’s a tough film about a beautiful relationship. And, to that point, “On Body and Soul”, which takes place in and around a slaughterhouse, has the single most difficult scene to watch in…maybe, ever. It occurs about sixteen minutes in, but only the one time, and then you can move on to the meat of the story (sorry, couldn’t help myself). 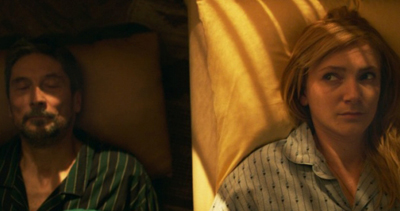 Our two damaged souls, Endre and Maria, Géza Morcsányi and Alexandra Borbély are perfectly cast. Géza Morcsányi ‘s Endre is the very picture of a droll post-middle-aged man, well past his ability to feign interest in love, only to have longing shaken in to overdrive by the emotionally disturbed, and impossible to keep your eyes off of, Maria. Alexandra Borbély brings an innocence, longing and inner-terror to Maria, sometimes all in the same expression. Gorgeous work. And while all the other performers are fine, special notice MUST go to deer trainer, Zoltan Horkai. The deer are…well…brilliant. No, really.

Director Ildikó Enyedi (with Máté Herbai’s expert cinematography) gives us imagery ranging from idyllically lit and brilliantly framed wilderness shots, to the stark, flourescent, and blood-spattered horror of the slaughterhouse, to the perfectly matched interiors of our main players. And then there is that scene…a scene Ms. Enyedi does not include gratuitously. It exists to show us that these characters, like us, can have wildly differing views of their immediate surroundings…at once indifferent to the brutal slaughter of cattle for our consumption due to our insular and lonely existence, and yet in awe of the sheer majesty and beauty of the deer that sprinkle their sub-conscious selves – our desire to love. Almost as if to prove of the universality of that contradiction, I confess I was eating a burger whilst screening the film, and while I was utterly disgusted by those sixty seconds, I did not instantly become a vegetarian. I happily finished my burger, because it was yummy. As is the rest of the film. So, PLEASE, muscle through the scene.

The score, by Adam Balasz is appropriately sparse and affecting, but special mention goes to Ms. Enyedi for the inclusion of Laura Marling’s Leonard Colhen-esque “What He Wrote”, which is maybe the saddest song ever written.

“On Body and Soul” might not be the best Hungarian film of the year (I still give that to “1945”), but no matter. That horrific scene aside, when all is said and done, I found it to be hypnotic, wholly original, and lasting. A film to savor. Add it to the astounding collection of high-quality films directed by women in 2017 – three of which are amongst those four Hungarian films mentioned above.