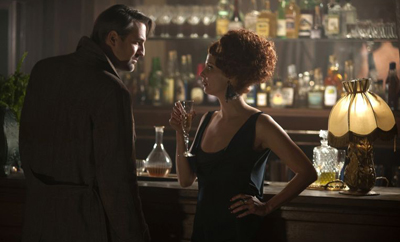 Based on the bestselling Hungarian novel, “Budapest Noir” by Vilmos Kondor, director Éva Gárdos has taken the title to heart in her film of the same name. Not simply a love letter to the old-school noir genre, it’s a note-for-note xerox. Which, in this case, is not a bad thing at all. What could have easily fallen in to parody stays within the genre by giving us a great story, in a historical period that heightens the stakes, and with fantastic three-dimensional characters. In other words, this is about as good as we’re going to get when it comes to an honest noir film.

Set in Budapest in 1936, the foreshadowing of what’s to come acts as a seventeen-ton elephant in the room. You might think that the actual murder mystery would suffer from all that heaviness, but it doesn’t in the least. This is mostly down to Gardos firmly planting her foot on the noir pedal throughout. The asides, the imagery, the music…everything is exactly as it was. As a result, the ending of the mystery comes as a satisfying surprise, and we feel as if we were in a world, not merely amused by that world.

The production design is spectacular. A love letter to a Pest that no longer exists, Elemér Ragályi’s stunning cinematography and Pater Sparrow’s detailed designs create a real, living piece of history. Andras Szeker’s screenplay is taut, funny, serious, and violent with the requisite twists and turns necessary to pull off a whodunnit. And Atti Pacsay’s music, while just a little too old school, certainly puts you in the frame of mind necessary to appreciate the goings-on.

But, for me, it’s the acting that makes this thing connect. Krisztián Kolovratnik‘s Gordon Zsigmond has a Harrison Ford presence about him that make the serious bits mean something, the funny bits land, and his ease with women seem appropriately effortless. And Reka Tenki is sublime as the both the messenger of things to come and our hero’s love interest. They’re joined by a cast of terrific character actors. Truly a joy to watch an ensemble have so much fun nailing a period and an attitude.

This is a really well-executed film that is also really fun to watch. And given the dearth of good noir coming out these days, that’s more than enough! If and when it comes to your ‘hood (or streaming thingee), make sure to give it a watch.