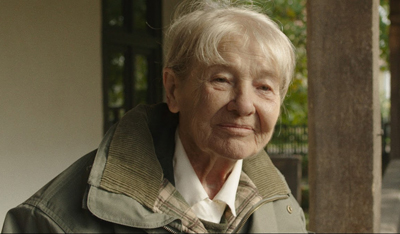 The plethora of good Hungarian films dealing with the WWII experience (whether pre- or post-war) at this year’s Chicago Film Fest has been extraordinary. So it’s fitting that my last festival screening was my third from that country on the subject (alas scheduling precluded me from seeing “The Whiskey Bandit” or it would have been a mini Hungarian Film Fest). And, while Márta Mészáros‘ “Aurora Borealis” doesn’t reach the heights of “1945” or “Budapest Noir”, it is most certainly a worthy addition to the canon.

A multi-generational epic about the connection between mothers and children, the film possesses a dense story…well, two, actually. The story within that earlier period is a brutal and inspiring survival story. The other, set in the present, is an investigative thriller to meant to fill in the giant blanks left behind. It is the deft manner in which they are intertwined that gives this film its juice. I say two movies because you can’t call the post-War scenes flashbacks…they are their own drama (and, frankly, the drama I was more interested in). It’s a terrific script, and though I did glance at my watch a couple times (usually when the film dwells on the daughter’s present-day marriage difficulties) it always sucked me back in quickly.

It’s a GORGEOUS film. Mészáros knows how to lens and produce period better than most, so while it’s tough subject matter, it is a feast for the eyes. Even the ugliest of moments is shot as if in a hazy dream thanks to the cinematography of Piotr Sobocinski Jr. . And is there any European city more of another time than Pest? The answer is no. My only criticism of the production aspects revolves around the score. I can’t seem to find who composer’s name anywhere, but it’s just as well. I found the music to be extremely cliched and intrusive.

But the acting is superb. Franciska Töröcsik (who is also in “Budapest Noir”) as young Maria brings a tremendous depth of emotional reaction to her plight, without which the rest of the film holds no connection. And Ildikó Tóth (who is also in “The Whiskey Bandit”), as the present day daughter of Maria, likewise brings a ferocious and loving curiosity to the proceedings. But without the lines etched on the face of Mari Töröcsik’s Maria, lines that seem to be directly connected to the secrets, lies and sadness that inhabit her history, this film would be for naught. She is a wonder…and it’s no wonder she is considered the Grand Dame of Hungarian acting.

A lovely way to end a Festival, “Aurora Borealis” is a film worth seeking out….even if, in my estimation, it doesn’t reach the heights of “1945” or “Budapest Noir”.