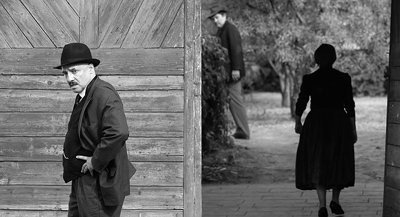 One of the four or five best films I’ve seen this year, Ferenc Török’s “1945” is an example of what can happen when you have a clear vision of your story, a brilliant script, visuals that will last in the mind of your audience for years to come, and performances that compliment the whole…all while illuminating an aspect of the Shoah most have neither thought about, nor know about.

Centered around a small Hungarian village soon after the liberation of the Jews from the camps, what starts out as a slice of life among the townspeople, soon turns in to a psychological examination when two Jews mysteriously arrive in the town with two large chests. That mystery, and the ensuing emotional response, follows a very unsettling, and brilliant, blueprint…that being the sparse and expansive environment of The Man With No Name westerns (made famous by Sergio Leone) as a canvas with which to explore the dark underbelly of the human condition. In fact, the opening scene, whether intentionally or not, brilliantly apes the opening of  “Once Upon A Time in the West” (without the gun play), which adds a brilliant sense of tension and anticipation to all that’s to follow.

And, like, say, “High Plains Drifter”, the reaction of a town who has benefited greatly from someone’s murder (in “1945’s” instance, the deportation and murder of their Jewish neighbors), is what makes the film crackle. Shame, guilt, anger, terror…it’s all in the mix. And thanks to a cast that is willing to show the ugliest sides of themselves, those feelings are as thick as a heavy fog. Peter Rudolf, the Town Clerk, and “decider” of all things in the village, is blustering, vulnerable, powerful, and filled to the brim with the repercussions of his life’s actions. His wife and son, Eszter Nagy-Kálózy and Bence Tasnádi, successfully act as the embodiment of the sickness inherent in the village’s history. And while the entire cast is sublime, special mention to József Szarvas, the town stooge, and Miklós B. Székely, who characterizes an empathy not shown anywhere else in the village, for their work. Finally, the face of the elder Jew, Iván Angelus, is haunting, sorrowful and as affecting as anything in the film. Without it, the film has no grounding.

The photography of this film is sensational. Shot in a stark and high contrast back and white, every scene offers something hypnotic, yet hyper-real. Presenting us with a post-war village that seems stuck in time, the sense of loss, and how it hangs over this community are constant players thanks to Elemér Ragályi’s cinematography and the production design of László Rajk. And there are so many tiny touches that make this environment feel so exacting and real, which, I assume, is down to Dorka Kiss ‘s art direction. But it’s Török‘s feather light touch, and the great confidence he has in his colleagues, his cast and the script he co-wrote with Gábor T. Szántó, that put this in the “great” category.

Finally, Tibor Szemzö ‘s score is every bit as sparse as the geography, and just as emotional. Reminiscent of Jerry Goldmsith’s original “Planet of the Apes” score (1968), Szemzö gives us simple touches of sound and un-intrusive noises, all of which act to heighten the tension. All leading up to the film’s climax, at which point Szemzö subtly references an important Jewish theme…which made me cry upon its recognition. Another brilliantly light touch in a film that hammers its message home without ever showing the attempt.

“1945” struck me hard..not quite as viscerally as “Son of Saul”…but with just as much feeling. If you are going to tackle post-WWII Europe in a film, there is a simple formula: find a small piece of the human puzzle, illuminate that reality in a way that also fits in to a semblance of a three act structure AND that keeps us wholly invested in its main players. It is a formula that seems next to impossible to execute with touch and expertise. In this Fest there have been two attempts. “The Reconciliation” missed the mark in almost every way possible. “1945”, on the other hand, not only nails its tasks, but borders on being a masterpiece of cinematic craft. I cannot recommend this film highly enough.