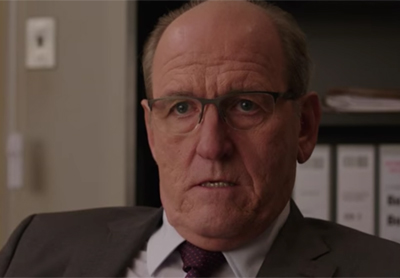 We have become starved of REAL spy shows, so lost in a world of procedurals has the television environment become. So, I want to be clear, I applaud EVERY attempt to bring back that long lost genre! And boy, oh boy, does this show have all the elements of a terrific spy series. Excellent cast, foreboding location, terrific writer(s), and some great action sequences. And, yet, when all was said and done, I felt, with some conviction, distinctively “meh” about the whole experience.

Now, to be fair, part of my impressions are based on my love for the greatest spy show ever made, “MI-5” (Hulu), which, interestingly, also starred Richard Armitage. But where that show fit all of the above in to each of its eighty-six(!) episodes, “Berlin Station” tries desperately to keep that tension alive over ten. Alas, it can’t, so, by the end, the “big twist” isn’t much of a surprise. We’ve pretty much seen it coming from the third or fourth episode. And it continues the new (and awful) trend of completing it’s story in the penultimate episode, and then giving us one more as a semi-meaningless coda that could have easily been incorporated in to that previous offering.

The writing is pretty good, the dialogue is fast-paced and believable. But it made me wonder how writers were able to make the plot exciting and instructive BEFORE the advent of cell phones. Almost every plot turn in ‘Berlin Station” is provided via a phone call that just happens to come when it’s most important. A lot of telling, very little showing. And the emotional arcs of Armitage’s character seem awfully forced. A little more letting the action do the emotional lifting and a little less furrowed brow might have been better. BUT, the direction is solid and the story moves (even if it should careen) toward the inevitable, in a way that forces you to watch the next episode. And the WORLD of the spies is well-developed, which in and of itself, is quite a feat and solidly interesting. – thanks, mostly, to the city of Berlin and the show’s photography.

The acting, however, is where this show excels (even if the accents are ALL over the map with no explanation). Excluding Armitage, who I’m beginning to believe just isn’t that great an actor – especially when on screen with anyone else, is exceptional. One of my favorite (woefully underutilized) actors, Rhys Ifans, is simply hypnotic. He is a mess, a believable mess, and every emotion seems to come from deep within his life and experiences. To think we’ve only seen him as Jonny Lee Miller’s brother, Mycroft, in “Elementary” and a bit part here and there, is absurd. I would buy a ticket to ANYTHING he was in. If there is a real reason to watch this show, it’s him…and, of course, Richard Jenkins. Jenkins is all kinds of great. Smart, naive, obnoxious, and real, you care about what happens to him, even as you despise him. It’s an amazing balancing act that only an actor of his caliber can handle. The other two leads, Leland Orser and Michelle Forbes, are stuck in characters a little too stock to break out of, but they both give it their all, and Orser has all the best lines in the show – reminiscent, at times, of the great insults delivered by Peter Capaldi as Malcolm Tucker from the underappreciated, “In The Loop” (which if you haven’t seen, find it NOW). Special mention to the gorgeous and charming Zahra Ahmadi, whose connection to reality makes the last third of the series its most believable.

So, listen, it’s not perfect, and at times its downright annoying. BUT, while it may be worse than some, it’s better than most, and, if you can ignore the meandering quality of first few episodes, and the general weirdness of American agents played by actors with British accents, then it’s probably worth giving it a shot. We get so few spy series these days, and I’d like the powers that be to make more. I mean, we’ll always have “MI-5”, but, as I’ve seen each episode of that series two or three times, I’m ready for more.

One thought on ““Berlin Station” (Epix)”