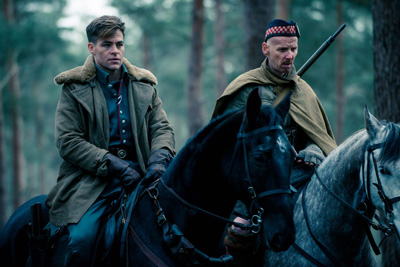 Let’s start by saying that “Wonder Woman” is, by far, the best DC-character film since “Dark Knight”, and for many reasons, is worth your entertainment dollars. But, admittedly, the DC threshold is not a terribly high bar to begin with. And as much as “Woman” has going for it, it’s also terribly confounding on just as many levels. But, first, let’s get to the good…

Hey, I can see the action!!! For maybe the first time in DC history, many of the battle scenes take place in daylight…and without quick cuts…and without close-quarter handhelds that prevent you from seeing the participants. Let’s hope DC has learned that, just as in the comic books, we’d like to SEE our heroes and villains as they fight. And what fights they are. Patty Jenkins vision (aided by Matthew Jensen’s cinematography), while sometimes verging on a little TOO clever with the intermittent slow-mo, is pitch perfect for the subject matter. Whether in the mystical city of Themyscira, WWI-era London, or on the front lines of the Somme, Jenkins has created both appropriate and occasionally magical works of art. The No Man’s Land battle, especially, is simply fantastic, both in P.O.V. and attention to historical detail.

The acting from our three leads is also quite good. Gadot is a terrific hero. Earnest, believable, innocent, smart, and uber-confident, she is everything you would hope for in the character. And the fact that she is almost painfully beautiful only adds to the mystique of the iconic character. And, at no point in the film, does she in ANY way need, depend on, or hope for the affirmation of any man. For this reason alone, you should reward the film with your patronage. One of the smartest moves Jenkins made was to cast Chris Pine as the male lead. Are there any actors easier to watch than Pine? This is more of the “Into the Woods” Pine, than the “Hell or High Water” Pine. Charming, funny, and heroic, he is also willing to play intimidation, respect, attraction and love for a female lead in a manner that most male stars simply can not. Rounding out the top line is David Thewlis. In an effort to not give anything away, I’ll simply say, he’s perfectly cast, and yet surprising. And huzzah for the return of Lucy Davis! Where the hell has she been (other than doing a lot of UK television)? As always, she’s terrific and the film becomes a little brighter every frame she’s in.

Rupert Gregson-Williams’ score, while owing more than a little bit to (or simply sounding a lot like) Paul Leonard-Morgan’s “History of Scotland” score, performs its tasks more than adequately. Subtle enough to allow us to have our own feelings while driving us through battles (both physical and emotional), it is confident, strong and well-crafted music.

On the other side of the ledger? Wow, there’s some really creaky dialogue. And WAY too much voice over exposition. We get it, love will always overcome hate. It’s evident in every frame of the film. So maybe don’t have characters use that exact phrase over and over. And, if you ARE tied to using VO for exposition…maybe have the performer perform it…not recite it like an Anglican-church reverend. Manages to stop the film cold whenever it occurs. Oh, and while I’m in a bitching mood…WE CAN READ! Germans, when amongst themselves, speak German, I assume. Not English. You can’t use subtitles in some areas and not in others. Just seems awfully lazy and, in a manner, insults the audience.

Also, some GREAT actors are utterly wasted. If you’re smart enough to cast the ALWAYS interesting Ewan Bremner (“Trainspotting” and “T2”), maybe use him more effectively (which could also be said of Said Taghmaoui and Eugene Brave Rock). And, finally there is the question of where the hell those accents on the island of Themyscira came from. What exactly were you going for with Connie Nelson and Robin Wright’s dialects? Bizarre, inconsistent and odd, they only work to throw us out of the film. If the purpose was to give meaning to Gadot’s Israeli accent, then have everyone do an Israeli accent….unless we are to believe that Nelson and Wright were incapable of perfecting a dialect for their few lines. Weird.

The above inconsistencies aside, “Wonder Woman” is one of the better tentpoles of the season. Apparently all that was needed was some estrogen to focus, overshadow and surpass the testosterone used in all the other summer action flicks combined. This is an atypical super-hero flick that will satisfy the typical super-hero audience…which is a wonder unto itself.

One thought on ““Wonder Woman””