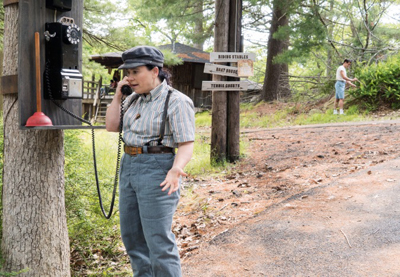 Let’s start with the mea culpa. I had not seen the first season of “Maizel” on the night it picked up its Golden Globe. In fact, I belittled it in my live blogging of the Awards saying something to the effect of, “well, the five people who watch that show will be very happy.” I was INSTANTLY attacked by dozens of friends for being an idiot. Then I watched it and  instantly agreed with them. In my defense, I honestly thought it was a musical. I really did. So to everyone, I apologize for being a judgemental moron on the night of the 75th Golden Globes telecast.

So, given that the first season was fresh, exciting, hilarious, stocked with fantastic characters and some of the best comedy writing in TV history, how could the second season possibly compare favorably? Would it have a sophomore slump like so many great shows? Well, beginning to end, it’s not better – but there are moments that are spectacularly funny…more so than in the first season. And it is in no way worse. It just no longer has the excitement that accompanies the initial discovery of witnessing great television.

Let’s start with the only thing a show about stand up absolutely must have…the writing. Both in story arc and dialogue, this show is easily as good as it gets right now. The story, now that the rules have been set up, opens up more…breathes a little more…takes us on different paths…employs more characters while never losing sight of what matters; the relationship between Mrs. Maizel (Rachel Brosnahan) and her “manager”, Susie Myerson (Alex Borstein), her standing in the families social structure, and, of course, her relationship to her craft (and the time period’s inability to hear a women’s perspective from the stage). But the dialogue WITHIN all that has never been better. Topping the first season, this version of “Maizel” is like watching a master class in “His Girl Friday” technique…pieces of dialogue tumbling one after the other at such breakneck speed, you find yourself laughing at lines spoken a good twenty seconds earlier when you realize you really did hear that. In fact, my favorite line of the season is a throw-away line from Ms. Borstein in episode seven that she isn’t even on camera for (guess it and I’ll send you a prize).

The look and feel of the show remains magnificent. Maybe even better since they have obviously upped the budget for season two. Locales either ARE real or look fantastically real. I won’t state where they occur as that takes away from the fun…but I can tell you that there are three episodes that look EXACTLY as described by my parents when they lived through the same place and time. Incredible stuff. Production designer, Bill Groom, and his staff of various art and set supervisors and craftspeople have filled in every last detail of whatever was in creator Amy Sherman-Palladino’s imagination. What a joy it must be for her to see how it all came together.

But don’t think for a second I am taking anything away from Ms. Brosnahan or Ms. Borstein. They are simply perfect in these roles. Not a wasted moment, every feeling coming from a place of reality, and all the one-liners seem utterly normal coming from their lips, never stopping their intentions within a scene. Tony Shalhoub is even better this season, which, considering he was already written to perfection, is saying something. He has more depth, more at stake and more brilliant takes than he’s ever had. “Monk” may have made the name, but “Maizel” may be what he’s most remembered for. Likewise, Marin Hinkle is given MUCH more purpose, responsibility and depth this season, all of which she ably crushes. The opening two episodes set up a series shift in her place on the show, and it is as successful as it is welcome. Of the leads, only the ACTUAL Maizel’s (Kevin Pollack and Caroline Aaron) fall in to stereotype… purposefully… it is an important part of the humor. After all, they are antagonists of a sort. But I think too much is asked of Michael Zegan as Joel. Asking him to play life-altering regret for ten episodes is a bit much and takes away his best attribute…the ability to sling dialogue with speed and humor.

Every single minor character in the show is pitch perfect and the larger cameo’s are equally terrific. Luke Kirby returns as Lenny Bruce and is even better this season, never more so than in the season’s final episode. Can we please at least give him a ‘Featured Supporting Role’ nomination in next year’s Emmys? Zachary Levi is a nice addition, if a little too stiff for my taste. But HOLY CRAP, Rufus Sewell’s single episode cameo is just f’ing brilliant! Between his turns in “High Castle”, “Victoria” and now this, he is having one helluva couple years, and we are the benefactors.

Finally, a word about the music. As in “Mad Men” the pop music choices within the show from that era are perfection. So much more than the usual Sinatra/Martin/Doris Day you typically hear. They delve deep in to the library of chart-toppers, one-hit wonders and obscure jazz pieces. If I have any criticism at all it is Ms. Sherman-Palladino’s choices for end credits, which are always something from a much more modern era. They’re good songs, but jerk one out of the show. I mean, I LOVE Siouxsie and the Banshees “Cities In Dust” more than the next guy, but I don’t at all get its place in the episode it completes. But that is BEYOND nitpicking.

Listen, if they can keep up this level of quality, I don’t see anyone touching them when it comes time to give out all the awards for comedy for some time. It really is that brilliant. Some may not get all the Jewish references that make up a good 20% of the show’s observational humor, but no matter. The other 80% is better than anything else by at least 50%. No idea what that adds up to other than one of the best comedies on television, maybe ever. That may seem a tad hyperbolic…but I feel safe in saying it will at least be in the discussion of the ‘Best of the Best’ ten or twenty years hence, if not right now.

Stop what you’re doing…take a day off, and watch it straight through!