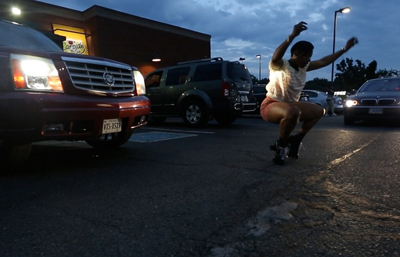 This loving documentary is simply a joy (with plenty of heartbreak) from beginning to end. Examining the importance of roller skating, and more importantly, the roller rink, to African American communities across the country, directors, Tina Brown and Dyana Winkler, have illuminated a part of culture that is uniquely of that world. And with that, of course, comes all the attempts of White America to subvert, shut down and criminalize one of the more important, and, in many cases, only, community building activities available to them.

But aside from its sociological impact, and maybe more importantly, the film is filled with frame after frame of sheer joy, individuality, and freedom from the every day. The exceptional skating, the camaraderie and the differentiation of style from city to city are, as a viewer, fascinating, giggle-inducing, and spirit-soaring. In fact, almost the entire first half of the film is dedicated to this…and it’s as astonishing as it is fun. And, not for nothing, flies directly in the face of the barrage of the negativity shown day in and day out from these communities on mainstream newscasts.

But because the story is so much more, the directors have included the personal stories of a few ‘Adult Night’ (as these once a week gatherings are called) veterans in different cities, and this is where the film really excels. Whether it’s the everyday tasks of Phelicia Wright to keep her kids out of the line of fire in Compton, Reggie Brown’s attempts to keep the tradition alive in eastern North Carolina, or Chicago rink owner, Buddy Love’s struggles to overcome the ever-encroaching business gentrification, the film let’s us know that this is, in many ways, life and death for these communities. And, further, that as each rink closes (as so many are), so does another chance to give its residents a means of having what many take for granted…a safe, joyful and community-building means of entertainment.

It’s a neat balancing act…since no matter how solemn, serious, or sad the film’s message may be, the joyfulness, creativity, and connection of its participants is never too far away. This is a film not to be missed.