“Won’t You Be My Neighbor?”
Directed by Morgan Neville

Funny how things flow in one’s life. As a child I hardly ever watched “Mr. Rogers Neighborhood.” Not because I didn’t like it, or wanted to. I DID like it and I DID want to. But I had two much older brothers and I eschewed everything they had passed by as “for kids”. It was uncool for seven-year-old me to watch it. So I didn’t. And now? Well, I’m a clinical therapist who spends a lot of time helping younger people navigate the dangerous waters of adolescence…most of whom could’ve used a healthy dollop of Fred Rogers’ unique brand of televised empathy. And, ironically, my oldest brother, who may have poked fun at me for watching it, ended up a phenomenal school psychologist working with elementary aged children himself. 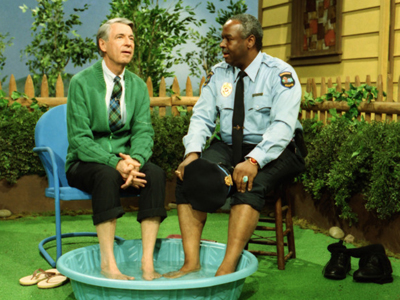 I bring this all up for a very specific reason as it pertains to Morgan Neville’s caring and loving documentary. Seeing the film made me long to go back and watch it in spite of the peer pressure not to…in spite of its “uncoolness”. It might have made quite a difference in how I handled my emotions as I grew in to my adolescence.

Of course, the other reason it is so effective is because it reminds us of the lack of empathy in our very modern, very angry and very loud world. Not to belittle the strength of the film’s craft, but I’m pretty sure this film would land differently if it had been released before 11/9/2016. But the effect of it being released now is that we constantly shake our heads and wonder what happened to the America where emotional strength was more important than financial strength. When real and difficult subjects for children (racism, divorce, murder, national disasters) were tackled with understanding and intelligence, and never with the patronizing tone of the “expert” or the “bully”. As a result, you will leave the theater not just amazed at the man, but, perhaps feeling even more depressed about the current state of leadership in this country.

As for the nuts and bolts of the film, it moves in a chronological fashion, but is never afraid to jump off that timeline trolley (so to speak) to spend some time on specific bits, moments, influences and the satellite members of the story. The talking head sections are pertinent and sparse, gratefully, because it gives us more time to see the clips, hear the voice, and watch the reactions of the children (which, of course, mirror our own in the theater). And one of the film’s real accomplishments is that it manages to straddle Fred Rogers’ religious ethos and secular psychology expertly. I know I was concerned that the film might devolve in to a treatise on Christian values. Yet that aspect of his life, while discussed at some length, is portrayed as an organizing principle in his personal makeup that led to a never-ending well of empathy, not a call to evangelism. Neat trick, that.

My only small complaint is that very infrequently we hear the director’s voice as he asks questions – a la Errol Morris. But with Morris, it’s a given part of the film’s structure. Not so here. You want to believe the speakers are talking to us…and you do…until you realize they are talking to a disembodied voice. Not a huge complaint, but there nonetheless.

The film is edited by Jeff Malmberg and Aaron Wickenden with care and purpose and never feels like it’s dragging. Part of that is due to the intriguing nature of what those involved with the show have to say, especially François Scarborough Clemmons (Officer Clemmons), whose actions as an African American on the show were the most groundbreaking given the times. Of course, they still hit hard as we see them anew given our backslide to those “times”. Equally interesting, if less visible, was the show’s long time floor manager, Nick Tallo, who reminds us that the day-to-day of producing the show was as joyful (if much more adult) as the show itself. And, of course, there is the insight and emotion brought to the fore by his wife and children.

The score for the film comes from Jonathon Kirkscey, whose only previous major effort was the brilliant doc, “Best of Enemies”. This score is filled with only the barest of bones…a quartet of piano, vibes, cello and viola (with an occasional bass). It feels effortlessly OF this film and of the subject. Beautiful music on its own, Kirkscey’s score acts as a lovely and personal aural hand-holding guide back to that world of our youth. It is, without a doubt, one of the many reasons the film works so well.

This is a terrific documentary in a summer already filled with terrific documentaries (and one of two outstanding bio-docs released thus far this year, “RBG” being the other). While I personally found “Three Identical Strangers” to be the more complete film, I, nonetheless, consider spending a couple hours as Fred Roger’s neighbor to be required viewing.

As is bringing a box of tissues.

One thought on ““Won’t You Be My Neighbor?””