Possibly the most interesting aspect of Bo Burnham’s feature debut, “Eighth Grade”, is that its humor, message, attraction and lasting effect will be different for every person who sees it. Take me…I’m a straight, white male in his mid-fifties. I know for a fact that it landed wildly different for me than it did on the twenty-something woman seated to my right in the theater. Not that I enjoyed it any less, laughed less, or was horrified any less, but this is a film about a particular experience in our current culture. And while I can certainly recall what that year in school meant to me (and how dreadful it was), it in no way mirrored what was occurring onscreen. Thus for people in their forties and up, for men of any age, for people of color, or for people with inner city or rural backgrounds, much of this film is going to seem ever so slightly pushed…maybe even insincere. But for those of you with a suburban background born after 1980, it’s going to cut right to the core of the experience you had as you struggled with the impossible task of individuation.

In other words, maybe more so in this film than in many over the last decade or so, your mileage will vary based upon the windshield you’re peering through.

SO…understanding that I AM that 54-year-old white dude, here’s what I thought of Mr. Burnham’s film: 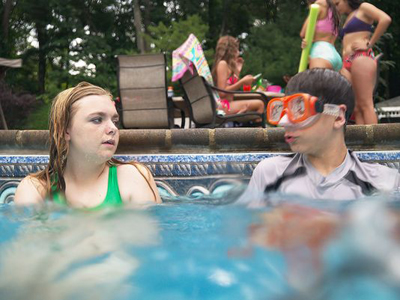 It’s lovely. Really lovely. It’s mostly very honest, mostly very funny, often terrifyingly real, and tells its story with a satisfying beginning, middle and end, even while not a whole lot happens in terms of what we’ve come to expect from plot. I can’t possibly understand what life as a child was like during the age of social networking, online bullying, overt sexualization or expectation at way too young an age, nor what it means to be lonely in such an existence. But I can certainly appreciate and empathize with a main character that is treated with as much respect and care as Burnham’s Kayla is. Burnham has smartly imbued in her the schlimazel-ness of Charlie Brown without ever directing us to laugh AT her. No, we laugh near her…aware of how each misstep reminds us of our own messy childhood. In fact, from the very first words out of her mouth, we..or I (I should speak for myself here) desperately want her to find the courage to succeed, to realize how insignificant many of these Herculean struggles were for us as we look back. It’s a masterful bit of direction and, lucky for him, he found his perfect muse in Elsie Fisher. The hope, pain, embarrassment, joy and abject disappointment her role requires are expertly played in her hands…sometimes all within one scene.

Now, to be fair…this is not all harmless fun or my-most-embarssing-moment shame. Some very real, very unsettling and extremely difficult to watch situations arise, especially in lieu of how our social structure is currently evolving. And the only thing more uncomfortable than watching it is knowing that quite possibly every woman, and many men, in the theater have lived it. Even here, Burnham manages to be both brave and careful at the same time. And as someone of a parenting age, I could only wish for a film like this to help bridge the gap between the shame of silent suffering and the ability to engage in trusting discussions had I a child.

As you would expect, the children in the film are extremely well cast, but, in addition to the astonishing Ms. Fisher, the award, for me, goes to Jake Ryan for his uber-geek Gabe. He’s simply an awkward mess of brilliance. Daniel Zohlgradi, as an upperclassmen, also very successfully imbues his situation with the honesty it must have. Finally, a shout out to the torch-bearer of Kayla’s high school hopes and dreams, Emily Robinson.

Now, here is where it gets more tricky. Josh Hamilton plays Kayla’s father. He’s certainly lovable…the cool, yet hopelessly embarrassing single dad. And the comparisons to Michael Stuhlgard’s father figure in “Call Me By Your Name” are pretty striking in terms of how each director utilized them. But, whereas Stuhlgard (who, let’s face it, is a much more accomplished actor), was so vulnerable while exuding his strength as an adult, Hamilton’s performance comes across as pushed…not quite as real. I’ve been trying to point my finger as to whether this is due to the writing or the acting, and, as of yet, I have not been able to piece it together. I only know that his performance was amongst the weakest links in the film for me. Fair or not…that’s what I left with.

Anybody who has ever watched the YouTube videos that are aped in this film will recognize the color palette of cinematographer Andrew Wehde. Hyper saturated, and hyper-lit, they perfectly portray how each of these kids wish their lives to be viewed from the outside…even as we, veterans of their journeys, know how much darkness exists in each of them. And kudos to production and costume designers, Sam Lisenco and Mitchell Travers, respectively, for NOT going with the obvious, highly-charicatured worlds of that age, like so many teen comedies before them. No, this is reality…very basic clothing with just the subtlest amount of differentiation to outline each clique.

And then there’s Anna Meredith’s BRILLIANT (times four!) score. Like a mad cross of early video game music, Philip Glass, Kraftwerk and Deadmaus, Meredith never allows us to get too comfortable. Each piece of music effectively (and appropriately) supporting the social landmines that Kayla feels she is certain to step on in each frame of the film. This is especially true of an early scene where Meredith utilizes the aural phenomenon known as the Shepard Tone (used quite often by Zimmer in his scores…especially “Dunkirk”) wherein a feeling of anxiety is musically heightened without seeming end. You can read about it here if interested, as I don’t want to use up too much of your time defining it. But, truly, it’s a great score and I’ve been listening to it pretty much non-stop since I saw the film.

Listen, regardless of your relation to present day culture, this is terrific film-making  – even with its minor warts. Will it become the defining relic of the age like “Fast Times”, “Dazed and Confused” or the most accurate movie of my childhood existence (at least culturally), “20th Century Women”? Given Burnham’s connection to the current cultural structure, it more than likely will. And, I guess the best thing I can say about “Eighth Grade” is that it probably deserves that status.

One thought on ““Eighth Grade””