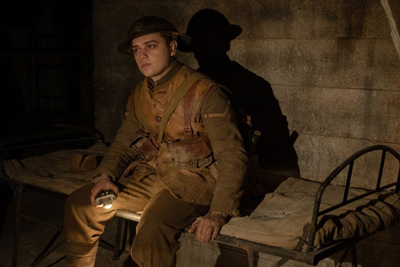 Let me start off by saying Sam Mendes’ “1917” is one of the great cinematic achievements, and certainly one of the best films, of this year…maybe more. It is an exhausting, claustrophobia-inducing, terrifying and ultimately, very satisfying film. It provides as much of a viscerally putrid reaction to the battlefield as you’re likely to find in a film. It spends its emotional life instructing us how easy it is to forget the human cost of war when yards of mud seem to mean more to its final outcome. It reminds us that the effort and sacrifice of every single individual counts…even when we count the dead by the hundreds or thousands, instead of by name. It should be seen and studied.  And yet…well…before I get to that, let me point out how fantastic the work of almost everyone involved is.

This is a film almost solely about atmosphere and one’s reactions to it. We’ll get to Mendes’ direction in a minute, but in the meantime, let’s just give the Oscar to Roger Deakins right now. His photography, his play with the light, and his obvious mastery of shadow are so exquisite…or decrepit…that at times you feel you are looking at a moving painting done by the Masters. His attention to detail, his understanding of how framing shapes emotion, is incredible. Of course without a brilliant production design to make our human response hum, all of that imagery would be for nothing. Instead it is everything, and that comes down to one of my favorite PD’s, Dennis Gassner (“Hudsucker Proxy” – and about a million other great films), and set decorator, Lee Sandales.

This being one of the more intense buddy/buddy films ever made, it stands that if we don’t believe in, and care for, the two buddies, the rest will simply be gloss. Luckily, Mendes (with casting director, Nina Gold), has chosen two boys that look like they came right out of Peter Jackson’s recent WWI documentary masterpiece, “They Shall Not Grow Old”. Dean-Charles Chapman (unrecognizable as the once youngest Barathian) and the exquisitely talented (and relatively unknown) George MacKay. Tough, scared, righteous by nature, and very very human, they are impossible to look away from (and not just because we literally never look away from them). In addition, Mendes has surrounded them with the perfect array of British stars (Colin Firth, Mark Strong, Benedict Cumberbatch and Richard Madden). And not because they are stars, but because they carry the weight of their stripes in such a way that you forget they are stars. And special mention to Clair Duburcq, whose scene reminds us that war is not just about the soldiers who fight it. Lovely.

And then there’s Thomas Newman’s score. Those of you who read this regularly, or know me, are aware that I think Newman hasn’t written a new score in his last ten or eleven films. Almost always possessing the same instrumentation, and very rarely straying from the wistful sounds of a soprano sax, they are beautiful compositions that, if you see enough of his films, takes you out of the film because they are so recurrent. So, imagine my fear, walking in to an epic war battle, of how we would be inundated with his usual phrases and light instrumentation. Add to that the impossibility of avoiding any comparison to Zimmer’s “Dunkirk” score (a comparison that the film itself easily avoids). Well, while I’m happy to say this is almost a wholly new Newman score (well, there is one or two very short moments of improv-y sax/flute – but they’re very short and actually work in a weird way), I still am not sure he was the right composer for the project. There were more than a couple times I felt he pushed the intensity when all the necessary intensity was already on screen. He failed to give us any specific themes…other than the “Lawrence of Arabia” moment of the film…the scene we’ll be showing for decades, “The Night Window”. And, finally, there are moments where it does sound almost exactly like Zimmer’s score. Listen, Newman is one of the greatest film composers in the history of cinema. My beef with him is about habits, not creativity…and I’m almost positive his score will not bother you in the least. But, fair is fair.

Okay…if you’ve read this far, you’ve been waiting for me to get to my Mendes’ problem. I’ve saved it until the end because in discussing my issue, I will be SPOILING one of the film’s most notable elements…the single-shot presentation. It’s unbelievable…incredibly well thought out, choreographed to within an inch of its life, and always seems in service to the story. The problem? I noticed. And then I noticed. And then I thought…”how did they do that?”…and then I thought…”well how the hell did they do THAT?!”. In other words, it took me out of the world of the film more than a few times. As a result, the claustrophobia, despair, and anxiety I felt much of the time was always dissipated by my appreciation for the craft…when I would have preferred to be stuck in it. Again, it’s a small item that I suppose many won’t notice, but it’s SUCH an achievement, and his goals were 100% in the right place, I wouldn’t have minded a couple cuts so I didn’t feel that I was watching an exercise in what’s possible. Does that make sense?

Regardless, “1917”, made one hundred years after the Armistice, is the crowning “Great War” flick we didn’t know we needed. It, combined with the aforementioned “They Shall Not Grow Old”, have made this centennial year a very special one for our appreciation and understanding of that most terrible of conflicts – the grandaddy of modern warfare – World War I.