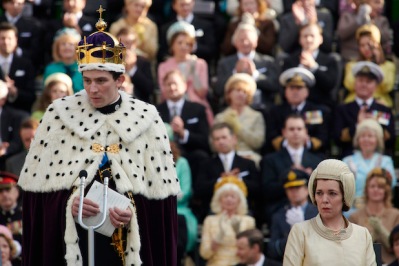 So…now that we’ve moved on from QEII’s initial, and one might say, tentative first steps (and brilliant first two seasons) as the bearer of The Crown, can the show hang on to its considerable quality in its third go-round? It’s a huge task, as not only have the main players been recast, they also, with age and experience,  bring with them new attitudes, as well. Gratefully, I’m happy to say that in almost every category, it manages to maintain its self-imposed high bar…with one giant caveat I’ll end with. First, its many successes…

I imagine it must be difficult to build a ten episode arc out of a set of circumstances more appropriate for an anthology. After all, the third season spans a full twelve years  (1964-77). And while their connection to an overarching Royal lineage sometimes suffers, the stories Morgan has chosen to write about keep you on the edge of your seat throughout – especially as they feel so connected to the truth of their history. And within those episodes, he manages to write for each specific character brilliantly. An essential attribute since the ride we are tagging along for is rife with historic shifts. Shifts that  most of us who watch will have lived through. In other words, as in the first two seasons, reasons abound for keeping a tissue box nearby.

Of course, with the budget emparted on the production by Netflix, part of the show’s glory is due to its production values. Never for a second do you ever feel like you’re not in the world of the show. It is so sumptuous, the “Downton Abbey” manor, in comparison, feels like Jimmy Carter built it. Stuart Howell’s photography is about as good as it gets on television, single-handedly making a high-end UHD television worth the expense. By using muted colors throughout, he paints the world with a definite sense of dread and restrained emotion that, combined with how we tend to recall that era of the UK, acts almost as a character. Amy Roberts costumes are so good, it’s as if she was the Royal Family’s tailor and/or seamstress, and the art and set decoration is simply magnificent…even when nowhere near the Palace. The interior of jets, trains, ships…Joan Sabaté and Nuria Guardia’s work is unbelievable, really.

Martin Phipps has taken over the music this time around. Given how magnificent Rupert Gregson-Williams and Lorne Balfe’s compositions were in the first two seasons, you could be forgiven for worrying that a new voice might detract from the overall feel of the show. But Phipps, staying away for the choral/chamber music that dots his fabulous “Victoria” score, has created pieces of sublime, yet somehow subtle, orchestral heaviness you’ll want to play immediately after you complete the ten episodes. (and, yes, I’m listening to it right now…Philip’s theme will probably stay with me longest…and, as ever, more bass trombones!) 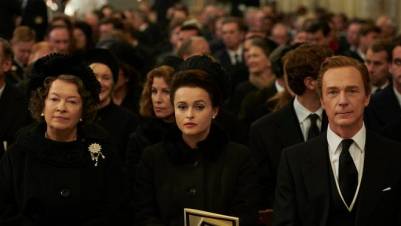 And then there’s the acting. I know I was concerned about some of the recasting…most notably Tobias Menzies, who has taken over for Matt Smith. I’ve never really been a fan. His work in “Outlander” (my only guilty pleasure, I swear) always felt two-dimensional. Same with his work in “Game of Thrones”. The only exception I found was in the incredible first chapter of “The Terror.” Yet even in that he was the least successful of a very large cast. But, since it is evident that Philip’s importance in the continuing story has changed here, and since he is no longer struggling to find a place standing behind QEII, Menzies pulls it back…WAY back. It is an approach that is very successful. My only real complaint is that he is not yet of an age to play the weariness of Philip’s age – which is particularly troubling in the episode which revolves around him. The other concern, shared by many, was with the replacement of Vanessa Kirby with Helena Bonham Carter, as Princess Margaret. Not to worry, Ms. Carter is magnificent throughout and has taken the baton brilliantly…every bit the hurricane portrayed by Ms. Kirby.

New characters in this Boomer era now include Prince Charles and Princess Anne, played by Josh O’Connor and Erin Doherty, respectively. There is something so bizarrely royal about the choices Ms. Doherty has made for Anne, that I found I longed to see MUCH more of her. But in truth, half of the season’s greatest acting moments belong to Mr. O’Connor. Not a surprise. His Charles is now in the same age range as Claire Foy’s young QEII. Searching for a place…finding himself both the prince of his upbringing, yet very much a young man in rapidly changing times…O’Connor gives a performance every bit as heartbreaking as Ms. Foy’s was. I would be shocked if he didn’t receive award nods for his beautiful work.

Minor character performances are almost all terrific. Derek Jacobi and Geraldine Chaplin’s Duke of Windsor and Wallis Simpson, Charles Dance’s Lord Mountbatten, and Harry Treadway’s Roddy Llewellyn all shine in their moments of glory onscreen. But special mention must be paid to two others. Mark Lewis Jones’ Welsh professor, Edward Millward, makes believable work of a too-quick plot, and, as ever, is about the easiest to watch character actor on television today. Finally, Jason Watkins, as PM Harold Wilson, is simply incredible…in fact, it might be the best performance of the entire series. His vocal and physical mannerisms, while mimics, are every bit as emotionally connected as John Lithgow’s Churchill. His work in a single scene in episode ten will probably be what stays with me the longest.

(As an aside, I’m not sure what Mr. Morgan or his casting directors have against the American characters on the show. They are all written in such broad, and frankly, ridiculous strokes, that it’s no wonder almost every actor who embodies them can do nothing to avoid seeming to be a buffoon. Jodi Balfour’s Jackie Kennedy in season two was about as good as it gets, but, wow! Just so out of touch with the rest of the show’s sensibilities and earnestness.)

All of which leads us to that caveat. No, I’m not about to say Olivia Colman’s performance isn’t great. It’s beyond great. She is so in control of her world, and doubts, and emotions, you know where you are within seconds of the first episode. BUT…an older, wiser, and more worldly Queen, at least as written this season, simply does not lend itself to wide swaths of emotional catharsis for the viewer. There are one or two moments, but overall, her task is to emulate a very specific middle-aged woman that, apparently, chose to eschew the emotional weight of the Crown in favor of a detached, yet present, stoicism. If that sounds impossible to pull off, it would be for 99.999% of the actors out there. Ms. Colman has no problem with it, but it is a jarring change from seasons one and two.

But, listen, the show is called “The Crown”, not “The Queen”, and if its purpose is to show us how historical events affected (and were affected by) the Royals, even that letdown is hardly enough of a reason not to watch in one binge-crazed weekend. It’s amazing television and I can’t recommend it highly enough!