Is there a purpose to writing a review of a film that is a continuation of a beloved television show? It is, of course, fairly evident, that those who love a show will go to see the movie, and those who either haven’t followed it, or tried and disliked it, won’t. So, with the caveat that I am a decidedly hooked acolyte of the show, I will attempt to write a review that will still be worthwhile to the Abbey fan. Which also means that if you have never seen the show or stopped prior to its fifth or sixth season, then move along to a different review (unless, of course, you want to know what to tell your grandma about it).

So why make the movie, other than to give us that Downton feeling all over again? Well…it’s now 1927. Times continue to change, and that which was unquestionable tradition, continues to devolve in to questions of is it still all necessary. And while some morays have begin to twist toward the modern, many others, in much more important circumstances, are stuck right where they’ve always been. The difference? We get to watch how these changes show themselves…and, more importantly for us, how they effect our good friends in the manor house. 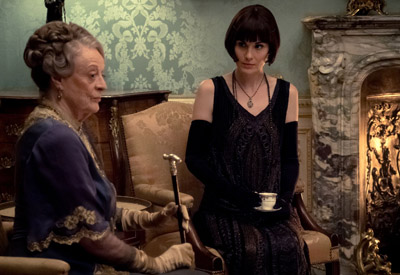 First, and foremost, let’s talk about how glorious this film looks on a big screen. Aside from one or two needless and overly long drone shots of the famous building, everything about it screams the era; the glamour, the shine, the decorative elements, and, most importantly, the feeling. This IS 1927 at a Yorkshire manor house. Not a surprise really. When watching the show, I imagine others, like myself, thought, “this is really gorgeous…if only they had the budget of a major motion picture!” Well…here ya go. For the record, I saw it in a Dolby Cinema with pristine projection and fantastic sound…so, as ever, your mileage may vary. In terms of production value, it’s a Masterpiece Theater wet dream. Emmy winners all, Ben Smithard’s photography, Donal Woods production design and Mark Kebby’s art are perfect…creating an environment that fully matches the haughtiness of the upstairs gentry, and the dim, yet prideful, working class below. And, no, I haven’t forgotten the costumes of Anna Robbins, or the amazing hair-styling of three-time Emmy winner, Anne Oldham.

The other element you can’t help but be thrilled by is the scoring. John Lunn’s music for the series, which won him two Emmy’s, is pumped up for the cinematic version. Not to worry, your favorite themes are still there, but the incidental music is suitably lush. And if the orchestra seems bigger, that’s because it was. But no matter. If you’re like me, the theme will have you tearing up from the start. everything else is icing on a very grand cake.

So, how’s the story? Well, it has some fits and starts, but, luckily, that which seems obvious ends up being not so. Granted, it’s just as inconsequential for the viewer as it’s ever been, with the caveat that it never seems so to those living it. That might be the show and film’s biggest accomplishment. It’s hard to care so much about characters that do so little…especially when it basically all boils down to the FIRSTEST of First World problems. But Julian Fellowes (the show’s creator and film’s sole writer), has spanned the gamut of the Abbey world…hitting all the right Upstairs/Downstairs notes with equal time, through a mesmerizing story line and a satisfying ending. And Engler, who directed a few episodes of the show, but has NEVER directed a feature before, shows a steady hand and an ability to get out of the way (minus the aforementioned drone shots – truly….could have cut ten minutes from the film with those alone). It’s never dull, and never feels like anything other than a warm, comfy blanket, or hot toddy.

But, none of it matters if the actors can’t re-connect with their earlier character thoughts and voices…something they mostly all do. Some don’t have the advantage of getting dialogue that helps at the beginning, like Daisy (Sophie McShera), and worse, some barely have anything to say at all (I won’t give that away, but, I mean…). But no matter. Maggie Smith and Laura Carmichael’s verbal sparring verges on Burns and Allen brilliance. Michelle Dockery (Lady Mary), less caustic than in the past, is, nonetheless, the most grounded voice throughout. Perhaps most impressive is Robert James-Collier (Branson), as he has been throughout the run of the show. He’s always seemed to be the most three-dimensional, perhaps because he’s always had the most to hide. But here he is a wonder. Brilliant work. Kevin Doyle’s Molesley is another standout. Again, I seem to lean toward the characters that, in the show, had the most shades, but there are whole scenes that he steals effortlessly. Of the new characters, standouts include Imelda Staunton, naturally, and “Sense8” star, Tuppence Middleton. And on the male side, let’s give a cheer for the longtime Brit TV vet, and always great, David Haig. Casting director, Jill Trevellick, who cast all but Season 4, has done a masterful job filling in the blanks.

Listen, if you love the show, you’re probably going no matter what I have to say about it. The good news is, you should have a really, really good time!