“Once Upon A Time…In Hollywood”
Directed by Quentin Tarantino

You may look at the photo above and wonder what significance it has to the story of Quentin Tarantino’s newest tale, “Once Upon A Time…In Hollywood”. The truth is it has none, specifically. But it IS from the film and showcases what “Once Upon A Time” is at its core: an immaculate fable about a different time and place, in a place whose sole purpose is to present fables about specific times and places.

The time he’s chosen is 1969 in a Hollywood deep in the throes of change…a Hollywood trying to reinvent itself to match the speed with which the country itself is changing. Desperate to leave behind the black and white morality tales that litter its Fifties output, the new Hollywood is about experimenting, feeling, tuning out and turning on…which is a massive upheaval for those that have made their mark in Westerns, war films and tuxedo-laden premieres. By choosing this precise moment, frozen in time due to the Manson murders on Cielo Drive in the Hollywood Hills, Tarantino has given himself a built in sense of heightened tension from which to extract humor, horror, and nostalgia….a nostalgia we may have never lived. And make no mistake, his ability to deliver film representations that make up our cinematic memories, and comment on them as if they’re our actual memories, are what he is really all about as a filmmaker. And on that level, he succeeds wildly in this lovingly crafted movie.

As ever, the lynch-pin of a Tarantino attempt is the script. And in this film, as in all his films, that which at first may seem meandering and slow (occasionally glacial) builds in to something very specific. There will be times in the film’s first hour plus that you’ll wonder why we are engaged in scenes that seem not to serve the story’s purpose. But by the end, these moments will become recognizable as the most prescient to the film’s ultimate purpose. In the meantime, it’s a whole lot of fun watching this world unfold…even as those who know their history are aware it must shift from fun and games toward something very different. But, as with all his films, there is much solace to find in his abridged/fantastical version of actual historical events. 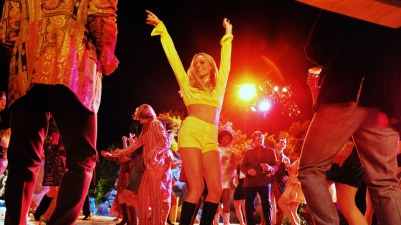 The film’s biggest success may lay in its hypnotic sensory bits. The film’s VISUAL world is simply unbelievable. Making the Coens’ “Hail, Caesar!” look like a cut-rate cable version of Hollywood past, Tarantino has given us what looks like a living breathing time capsule. Using  green-screen techniques (I think?), the shots of Hollywood are so sensational, it’s as if he has taken his entire production crew back in a time machine. Robert Richardson’s photography is essentially bright and colorful…like an episode of “Rowan and Martin’s Laugh-In” come to distorted real-life. And Barbara Ling’s production design (in collaboration with Richard Johnson’s art direction, Nancy Haigh’s sets, and, lest we forget, Richard Schuler’s choices for the locations – instantly recognizable to anyone who has ever lived and worked in the industry there) is as evocative as anything we’ll see this year…more so than period pieces, war films or science fiction extravaganzas. And, as ever, his musical choices, while instantly recognizable as being of the time period, are just outside the norm for us to have previously attached our own memories to them. Finally, his ability to interweave existing films, shows and advertisements with fictional entities is simply brilliant. There can not be another director who understands Hollywood’s place in a particular time more than Tarantino.

All of which makes the film an interesting excursion. But character is the ultimate arbiter of his stories. This time ’round he’s given us two friends steeped in the success of that prior Hollywood, both desperate to bridge the gap to the new Hollywood; one a successful acting cog, and the other, one of the thousands who’s lived on the fringes, yet are just as responsible for the success of, the Hollywood fable-making industrial complex. In contrast, he gives us a third character…one who represents the mythos of the NEW…defining what the old are striving for. As ever, the success of the STORY of this film depends solely on the three actors playing these characters, or else it’s simply a pretty picture. And here he (and casting director, Victoria Thomas) has once again shown his affinity for success. As a result, they are our eyes and ears in this long-gone Hollywood, giving us, I’m sure Tarantino hoped, the ability to inhabit that which we couldn’t possibly remember.

Played with a vulnerability I’ve not seen from Leo DiCaprio before, his Rick Dalton is a tension-filled ball of expectation and insecurity (you know…an actor). He gets better as the film goes along, which, interestingly, works as a metaphor for his Hollywood existence. And there are scenes you will find particularly affecting if you, like me, are also a performer in the industry. It’s great work. The representative of the new (Sharon Tate), is played almost without dialogue by the always incredible Margot Robbie. I’ve already heard numerous complaints about how she is underutilized (a complaint which probably comes from people who are perhaps not quite fully aware of Tate’s place in the history of Sixties culture and change). I couldn’t disagree more….she is a representation made real, made human. And not many actor’s today have the ability to show us a character’s inner humanity via nothing more than a facial expression than Ms. Robbie. “California Dreaming”, indeed. But, let’s be clear about something. This is Brad Pitt’s film. Somehow embodying the “every-man” while always being something of a superhero is perhaps Pitt’s greatest gift, and Tarantino could not have chosen a more perfect character or vessel for that very specific attribute.

But the minor characters are of equal importance. Margaret Qualley is terrific as a Hippy-culture siren. Dakota Fanning brings three dimensions to our understanding of Squeaky Fromme. Julia Butters is this movie season’s version of Lady Mormont (Bella Ramsey). Having made her name in the third season of “Transparent”, here she is the perfect representation of child Hollywood ambition mixed with the Method acting principles beginning to overtake the industry at the time. And I won’t be giving anything away by telling you Damien Lewis is incredible..so much so, you may not know it’s him. There are dozens of appearances of terrific actors that make up the smallest of roles in this film…some are intrusive, but most are perfect. Like Mike Moh. Wow.

As with all Tarantino films post-“Pulp Fiction”, audiences will be split on this one, for sure. This is more mature and more nuanced than most of his films. And, ultimately, it will require something more from his audience than his past films…that being at least some knowledge of the subject to fully appreciate his take on it. Which side am I on? The only negative thing I can say about the film is that it occasionally meanders…in service of a terrific ending. I’d say that’s a film worth highly recommending. There’s more than enough to enjoy no matter what you previously knew about its time and place.

OH! Stay until after the credits.