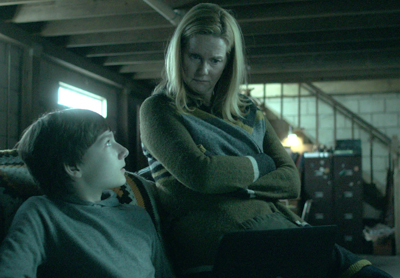 Is there a show on TV where the characters are as richly despicable as on Netflix’ brilliant “Ozark”? Maybe despicable is not the word. Trapped bobcats? Yeah, that’s more like it. With few exceptions, these are all people trapped in their situations…and every move/despicable act is their own version of snarling and clawing at the walls of their cages. Further, every move toward freedom only results in their being trapped once again and put right back in a smaller, even more dangerous cage. Lots of room for juicy interactions in that environment. And season two does not disappoint.

But lest you think it’s a simple rehash of the first season, know it is no longer a boy’s club. Season two is about the women. Five fantastically written women…with much more depth than any of those in season one. Placed within a script that always moves forward, heartbreaking emotional peaks, and a sheen of blue more pronounced than anything from that period of Picasso’s life, “Ozark” season two is a can’t miss ten hours of televised bliss.

Picking up right where season one ended, the story doesn’t just continue…it grows. Dubuque and Williams, no longer constrained by “fish out of water’ contextualization, have the freedom to delve deep in to how these characters adapt, connive, interact, and internalize their fears. So few shows spend this much time revealing the inner workings of so many characters’ organizing principles. “The Americans” come to mind. But even then, we’re really talking about a single couple. In “Ozark” there are almost a dozen such examples. It adds a layer of intrigue that is fairly unmatched.

And where season one had Jason Bateman’s Marty to thank for that, this season it all comes down to Laura Linney’s Wendy, Lisa Emery’s Darlene and my pick for a SAG/Emmy Award for supporting work, Julia Garner’s incredible Ruth Langmore. Maybe one of the two or three best female characters written this season, she is as connected to her surroundings and her emotions as we are to her plight, needs and wishes. It’s simply beautiful, even when it is at its ugliest, its most needy, and its most street smart. Which is to take nothing away from the other two. Laura Linney, as one would expect, given her greater contribution to the machinations of the plot, is brilliant. Not as sympathetic as in the first season, her Wendy is, nonetheless, essential, strong, human, and the quintessential family beacon of strength. And Lisa Emery gives the entire show it’s grounding as Darlene. Without her entitled outrage, long-developed grasp on reality, suspicion and hatred of all things non-Ozark, the show would simply be another suspense thriller. The other minor female characters also add much, but if I tell you who they are, I will be giving away some important plot points…so mum’s the word – just know JS and JM are terrific.

None of which is to say the men aren’t also fantastic. Bateman is, as ever, perfect in the role, even if he occasionally stretches too far out of his emotional comfort zone. Peter Mullan continues his brilliant turn and remains the perfect partner/counterpart to Emery’s Darlene. Harris Yulin’s Buddy has even more sway, involvement and connection this time around, which is a very good thing and makes the kids’ contributions seem more based in a sense of reality, rather than necessity. Only Jason Butler Harner suffers this season…mostly from having emotions that do not feel remotely based in reality. That said, he’s such an interesting actor, he almost overcomes it.

And while this show is a character based drama, the success of season two is aided heavily by its production values, most notably the aforementioned cinematography. I’m hard pressed to think of any other show that so specifically illustrates how we see the dark underbelly of a beautiful environment as specifically as “Ozark”. Not sure which of the series’ four photographers to thank for that, but my guess is it all comes down to creators’ Dubuque and Williams. And a large part of the show’s intrigue is aided by it’s opening “Wild Wild West”-like opening graphic…where four main elements of the show are featured by icons inside a large “O”. Someone put together a video of all season one’s such offerings. It’s interesting to see them one after the other and you can watch it here. Finally the Reznor/Ross-tinged score by “The AO’s” composers, Danny Bensi and Saunder Jurriaans is effectively creepy (with added song selections that include works by Bowie, Johnny Guitar Watson and Glen Campbell).

I’m quite certain you’ve already heard from a million friends that “Ozark” should be on your watch list. I’m saying put it in front of the line…especially as you’ll be rewarded with an even better season two.