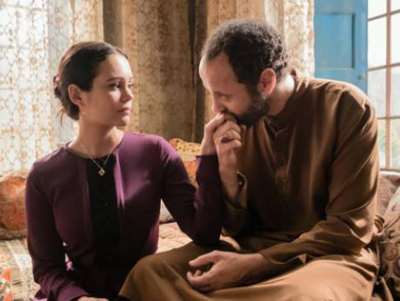 In a nutshell, the new iteration of “Jack Ryan” should have been better. After all, it does have an interesting story, is well-paced, possesses plenty of tension, and contains some terrific acting. So…why isn’t it better?

Alas, it comes down to John Krasinski. He is, and always has been, eminently likeable, which is a great thing for box office and TVQ, and I’m sure the creators, Carlton Cuse and Graham Roland, thought he would be a perfect fit for Jack Ryan…having been played by Harrison Ford, Alec Baldwin, Ben Affleck and Chris Pine, previously. But here’s the problem. In a two-hour film the evil done in the name of “good” doesn’t have time to simmer and fly in the face of our “good guy” understanding of Jack Ryan. But in a ten-part series, within which most of our time is spent in a very different culture, that Jack Ryan “earnestness/innocence” often flies in the face of what’s going on around him. In fact, his “aww shucks” attitude caused me to roll my eyes on at least three separate occasions.

That out of the way, what other critics saw as a major drawback, I loved…it’s careful, slow and informed pacing. Some went so far as to call it boring. But beyond a slow first episode, I did not find that to be the case at all. I appreciated the creators/writers giving me the time to let the danger of each situation slowly wash over me, as opposed to punching me in the nose. I do wish the photography had been more specific…it felt like they just lit each scene with the natural light of wherever they were. I prefer to see a color palette that matches the overall feeling of the show (“Ozark” being the perfect example). But overall, the story is engaging, well told, and comes to a satisfying close.

But mostly I can forgive its drawbacks because of the Arabic performances…especially the phenomenal Ali Suliman. As the antagonist, it’s nice that he’s been given enough of a backstory that we can understand what motivates his evil tendencies. And he carries that history within his eyes in every scene. He was equally brilliant in “The Looming Tower” (albeit, a much better scripted show) as one of the good guys. I hope he is able to break out of playing military or jihadists soon. He’s certainly good enough to carry a show or film by himself…evidenced by the way in which he wipes the floor with Krasinksi’s attempts to match his craft. Haaz Sleiman is also terrific as his more Westernized brother. But it’s the Saudi actress, Dina Shihabi that gives this thing its heart. Without her strength, vulnerability and resolve, Krasinski would literally be treading water in the middle of the ocean, and her performance acts as an anchor for him to consistently refer back to. The American actors, on the other hand, are universally meh. Even Wendell Pierce doesn’t bring a whole lot to the proceedings. Abbie Cornish acquits herself well in a role based on a size 6 romance drowning in a size 12 shoe.

Listen, if you love Clancy, this will probably come close to satisfying your itch for an Clancy origin story show. But for everyone else, I can’t recommend it unless you’re desperate for an action series that’s more intelligent than some, or want to see some great performers that are out of the mainstream. It’s a perfectly reasonable way to spend a few evenings, but there are much better shows of this ilk out there. Wish I had better news.