Chicken or the egg…or, rather, does the Animated Shorts nominating committee have terrible taste, or did they simply choose the best from a weak bunch? The best of the five nominees chosen in this year’s category wouldn’t have made the cut in the past four or five years. That doesn’t mean they are without merit, but this is supposed to be the best of the best, right? Which means they should include a great story, great animation, and great production…as well as an emotional center that draws you in. This year, I’d have been happy if any of them met two out of the four. Okay, in fairness, a couple do possess something verging on the above – and certainly utilize great craft – but even these compare unfavorably to the vast majority of prior nominees. Ah well…here are your nominees…

Each year, as part of ShortsTV’s theatrical presentation of the Animated nominees, they’ll add a “Highly Commended” film or two to fill out the ninety minutes necessary to rationalize charging us a full ticket price. And each year, one or two of these FAR outclass a short that’s been given a nod. Well, this year, the short that easily could (and should) have been left out for something “commended” is Kobe Bryant’s self-serving, nothing of a film, “Dear Basketball”. The film, whose narrative aspects last an entire three minutes (the credits last just as long), is nothing but a commercial for “KOBE Studios”. To be fair, it is lovingly drawn and animated in pencil, but no more or less so than any other animated commercial you might see. If Kobe didn’t play for the Lakers in a town down the block from Hollywood, there is no way this even sniffs a nomination.

On the other hand, one of the “commended” shorts, “Lost Property Office”, from Australia (directed by Daniel Agdag), offers everything a nominee should possess. It features an original sense of  style within a stop-action framework, a story that hits you in the throat in its universality, and manages to compress its considerable quality in to a tidy and succinct ten minutes. I would have put it in the top two or three of all nominees for it’s use of light and shadow to accentuate loss, loneliness and the many facets that make up the adventure of life. It’s quite brilliant. But no, Kobe-World it is.

The most eye-popping and realistic animation of the bunch belongs to this strange, and often hilarious, CGI ditty from France. Told from the point-of-view of the amphibians and insects that inhabit the world of a deserted human home, “Garden Party” manages to stay away from the overabundant anthropomorphism which tends to take away from the wonder of seeing through the eyes of a critter. As a result, we get a simple “what if” that allows for real humor…nothing too forced (except for maybe the payoff).  I enjoyed it immensely and could have easily watched it at twice its length (seven minutes). It may not instill enough emotional connection to win, but it certainly is worthy of its nomination.
______________________________________________________________________
“LOU” (USA)
Directed by Dave Mullins

The Oscar front runner, “LOU”, is a Pixar joint and possesses all the attributes that corporate moniker engenders. If you have kids you may have seen it as the lead-in to theatrical release of “Cars 3”, but it was new to me. It’s wondrously drawn, brilliantly conceived, imaginative, and connects to every part of the halcyon memories that makeup our remembrances of early childhood…all with a lesson that we’re never too old to learn, nor impart on our own children. Director Dave Mullins has crafted a fun, exciting and smile-inducing film utilizing all of Pixar’s vast resources. The characters (especially LOU) are spot on and the action moves imaginatively and quickly. Not quite as eye-popping as last year’s Pixar’s Oscar-winning short, “Piper”, it nonetheless wouldn’t offend me if it garnered the gold statuette. I completely expect this film to win, even if, for me, it’s just this side of typical to be truly outstanding.
______________________________________________________________________
“Negative Space” (France)
Directed by Ru Kuwahata, Max Porter 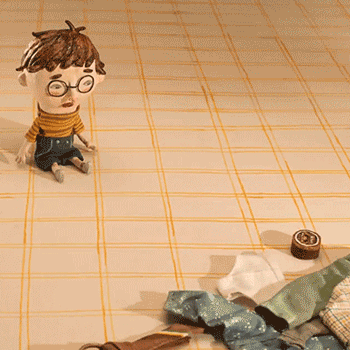 Featuring an All-Star cast of voices that includes Rob Brydon, Dominic West and Rose Leslie, this 30-minute film is based on the re-imagined fairy tales by Roald Dahl (and illustrated by Quentin Blake). The stories were made for moving pictures, both in t and for the most part they succeed. The film (part one of two) is irreverent, often funny and incredibly well-conceived in its use of visuals. There’s just one problem. It’s kinda boring. Given the cast, the adult nature of the tales and the quality of the animation, this is shocking, but they seem to have forgotten to connect the script to the rest of the shebang…which means there are sections that just go nowhere at all. At thirty minutes (the longest nominee by far), that’s deadly. I’m willing to admit that if I had watched it on its own, I mightn’t have noticed as much. But I didn’t and so I did. It was a little too easy to be lulled to sleep by the dulcet bass tones of Dominic West’s voice as our narrator, the Big Bad Wolf. And, perhaps a bigger issue, much of the humor is based on the words and performances, not the imagery – which is a huge failing of anything in the fractured fairy tale genre. Still, it’s certainly an achievement, and like “Garden Party”, an understandable choice by the nominating committee.
______________________________________________________________________
I don’t like to grade films, because it undercuts the REASON for an opinion. But, with the shorts I’ll make an exception: