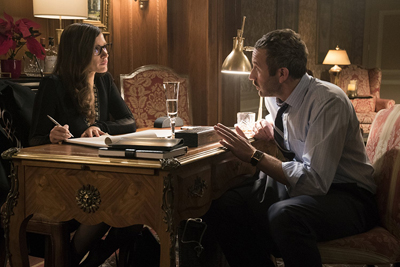 “Molly’s Game” delivers pretty much exactly what you would expect from a Sorkin script: smart, snappy and witty dialogue expressing themes that shoot far beyond the limitations of whatever the actual story purports to be about. But this isn’t just a Sorkin screenplay…this is his directorial debut. And while it’s a really, really good film, a firmer grip on the till might have pushed it over the line to greatness.

But, man, can he place some words next to each other! It’s a simple story, really. Middle-class-to-riches-to-rags, with a decent court battle as the plot mover, laid over the world of private, high-stakes poker culture. But Sorkin manages to turn that in to:

It’s fascinating & hypnotic in its speed of thought, all the while possessing pure musicality in its dialogue.

But (and there is a but) what ALSO exists in his scripts are the potential for stiffness. People, real people, don’t really talk this way…unless, of course, everyone in the room is the smartest person in the room…which they aren’t…only he is. And that’s where a seasoned director comes in. A good director acts as a buffer between his intellect and their emotion. Sorkin isn’t that objective…yet.  He doesn’t seem to know how to give the actors enough space to come to the words on their own. As a result, the really important bits in the third act seem forced…stilted even, and, ultimately, a let down.

Which is a shame since this is a tremendous group of characters inhabited by a tremendous group of film actors. In addition to character work from the always great Michael Cera and Brian D’Arcy James, “Molly” gives us, as its leads, Idris Elba, Jessica Chastain and yet ANOTHER outstanding later-in-life effort from Kevin Costner. They are excellent, engaged and smart enough to get it. But they all seem just a little too concerned with getting the language just right…like they weren’t given permission from the professor to make it their own. It’s a SUBTLE failing, very subtle, but an impediment, nonetheless. Oh, and Chris O’Dowd is in it! And brilliant! In fact, he, more than anyone else, avoids the traps set by Sorkin, giving the film’s most human performance. Perhaps a touch of improv in the rehearsal process might have helped get everyone else to O’Dowd’s level…actually, I have no idea what would have worked. I’m not a film director. I DO know that I felt let down as the story careened toward its conclusion, when I should have been moved to an entirely different level.

Regardless, the world of the film is intriguing as hell, the backwards and forwards of the time frame mixed with an excellent use of voice-over keep you enthralled throughout. It’s edited brilliantly, and to within an inch of its life, by the trio of Alan Baumgarten, Elliot Graham and Josh Schaeffer. Finally, Daniel Pemberton’s score, while not brilliant, is well placed for this film.

Listen, I highly recommend you go see “Molly’s Game”, an opinion I can offer without a moment’s hesitation. But the selfish moviegoer in me just wanted a teensy bit more on the emotional side, given just how delicious the words are.