“Have A Nice Day” (China)
Directed by Jian Liu 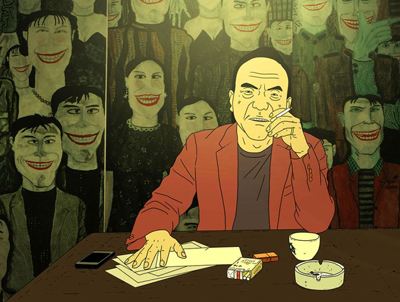 This trifling from China, an animated film based on a graphic novel, is oddly interesting for its occasional artistry and characters at best. Alas, at worst it is dull and has very little payoff. My experience of it leaned toward the latter.

The story is incredibly basic, and only occasionally veers in to a creative groove. And the animation, relying as heavily as it does on Bakshi-isms (especially “American Pop”), isn’t unique enough to overcome its crudeness. Yet, somehow it has won several international awards and is even being touted as a dark horse for an Oscar animation nod. I don’t get it. For me, it’s a total swing and a miss. Well, maybe more of a popup with a man on third. And the inclusion of a Trump soundbite does not make it political as I’ve seen it described. It just makes it of its time.

But…if you must see animation, there ARE moments of laughter and creativity that might be worth giving it a look. And the score from an outfit called The Shanghai Restoration Project, described in wikipedia as “a contemporary electronic music group…(which) combines traditional Chinese instruments with hip hop and electronica.” is great. The music was the best part of the film for me by far.

Just watching the trailer now, I assure you, if “Tarantino made “Pulp Fiction” as an animated film”, it would not be this. BUT, the trailer did remind me of several laugh out loud moments in the film. Regardless, while your mileage may vary, it ran out of gas pretty early on for me.