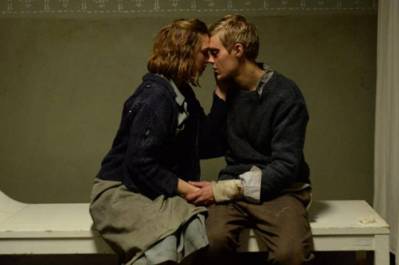 I hate to bash a film, especially an indie as concerned as “Reconciliation” is with getting a piece of history right. But, man this is a terrible film. It’s sole accomplishment is to show us that at the very end of the WWII, Eastern Europeans were all capable of acts of horrible violence, even if (or especially if) they had that violence perpetrated on them. And, listen, I don’t mind bleak if you can give us an actual protagonist or story to inform the bleak.

Okay, take a breath, Jason. There ARE some positive aspects of the film. The cinematography is hypnotic…even if it does linger on the same patch of grass for most of its length. And the performances are mostly good, especially the female lead, Zofia Wichlacz. The men are all just so one-dimensional, it’s hard to get behind any of them, or to blame them. They certainly give it their all…especially leads Julian Swiezewski and Jakub Gierszal…but it’s a fool’s errand.

Dear Eastern Euro directors: The stories you have to tell are important, especially this one. But “Son of Saul” now exists in our recent memory and has, as a result, cornered the market on that filmatic style. “The Reconciliation” could’ve been a terrific film. But the script and production choices failed to allow us to care about anybody in the film, thus all we’re left with is dark images of death, rape and violence. Without a clear story or message, that’s not an illuminating way to spend a couple hours. Sorry.

Sorry, trailer has no subs…but you’ll certainly get the point…