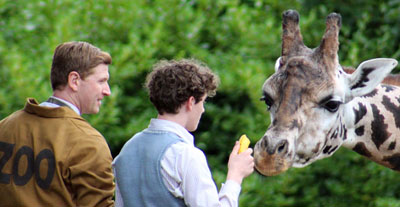 Admittedly, I have two major blind spots in my film predilections and knowledge: horror films and family films (I refuse to acknowledge the new gimmick of faith-based films as a genre). The last horror film I saw was either “Sixth Sense” or “Blair Witch Project”. Both scared the shit out of me and that was that. And, other than the “Potter” anthology and animated films, I have NO idea when I last saw a feel-good family film…until now. As a result, and because I’m not sure we saw what will be the distributed cut, I’ll make this short and sweet.

Colin McIvor’s “Zoo” is about as family-friendly as it gets, focusing as it does on a boy and his elephant during the Blitz in Belfast. And with it comes all the things I would normally crucify…an intrusive and formulaic score, emotional shifts that seem forced, and the requisite uber-happy ending. SO…recognizing this prejudice during the screening, I attempted to take my head out of the game and pretend to be a kid again watching “Old Yeller” for the first time. That’s probably the best reference, since the stakes are sky-high throughout “Zoo” (although in no way does that reference inform the plot!).

In fact, the one element of the film that DOES hit you, as an adult, is the production design. This is a gorgeous film that does a tremendous job of recreating 1940’s Belfast…and the tension and anxiety that comes with those horrible times. Secondly, the script is actually quite good. The story flows, ebbs and excites just as an old-fashioned film should.

The biggest problem for me lays within some of the child performers. Lead actor, Art Parkinson continues a dangerous trend of giving minor characters from “Game of Thrones” (Rickon Stark), lead roles with no real return on the investment. Stiff and not sure what to do with his hands, his performance’s only advantage is that it gives more room to showcase his teen co-hort, Ian O’Reilly, who is sensational. He gives the kind of performance that brings one back to “Chitty Chitty Bang Bang” or a “Potter” film. Rounding out the adventuresome trio is Emily Flain, a little stiff herself, she tries to carry the weight of family reality as the daughter of an abusive father. And, in one of the better moves of the film, McIvor casts James Stockdale…but if I tell you anything about his inclusion I’ll be giving away too much. Kudos, nonetheless, to the director for that bit of casting magic!

The adults don’t have much say in the proceedings with the exception of the always great Penelope Wilton, who continues the fabulous trend of giving major characters from “Downton Abbey” (Isobel Crowley), lead roles with a fantastic return on the investment. Stephen Hagan should also be pointed out as giving it his all. Toby Jones, on the other hand, seems to be asleep at the wheel, especially as his character is one of the only smaller adult roles that is fleshed out.

Anyhoo…when this is distributed, absolutely bring the family. The kids will love it! Me? I’ll be watching more South Korean gangster flicks, Eastern European dramas, and historical docs. Any wonder that I’m single?

No trailer seems to be available yet. Sorry.