“The Other Side of Hope” (Finland)
Directed by Aki Kaurismäki 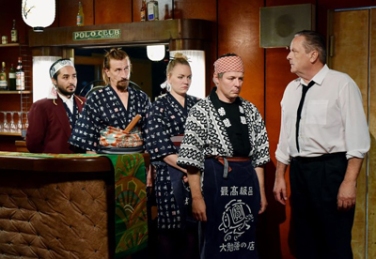 Aki Kaurismäki, probably more than any other European director, has as unique and identifiable a style as, say, Wes Anderson. Kaurismäki‘s particular brand features actors standing still as statues while delivering their lines in the midst of absurd situations that somehow mirror everyday life AND tackle very serious subjects, most notably, the manner in which Europeans abuse the illegal immigrants whose only crime is looking for a safe haven. If you’ve seen the fantastic “Le Havre”, then you understand what I’m getting at (if you haven’t, watch it as soon as possible!).

His latest film, however, merely moves the setting to Finland and simply repeats both the process and the general plot. The new setting DOES lend itself to the kind of deadpan humor Kaurismäki prefers, since that’s how we perceive Fins already. And the humor works, extremely well. I laughed out loud several times during the film. And his use of buskers and bands as scene transitions is effective.

However……the problem comes with the introduction of the immigrant plot. Whereas in “Le Havre”, the joy and sadness behind Andre Wilms eyes guides us on the strange and magical journey of emotional counterpoints, our hero in “Hope” just can’t compare. Funny and in charge as “Hope’s” lead (and restaurateur), Sakari Kuosmanen, may be, he doesn’t have enough emotional empathy BUILT IN to his character. His eyes remain deadpan throughout, and his sense of concern and love are only available via action, not emotion. It doesn’t help that Sherwan Haji, making his acting debut, is asked to be both funny AND sympathetic – a truly tough gig for the most experienced of actors. It is a weight too heavy for Haji. Kaurismäki tries like hell to tie it all together, but falls short of the mark.

So what are we then left with? Ninety or so minutes of quirk and laughs, and the sense of disappointment that comes with wishing we had felt more. I still love his style, and look forward to his next film with eagerness…and hope.