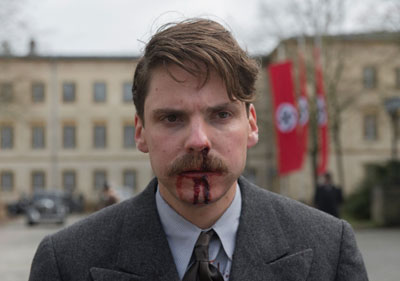 Continuing a summer trend of viewing or attending films about WWII, I eagerly dimmed the lights to watch “Alone In Berlin” (available via iTunes and Amazon), a film starring Brendan Gleeson and Emma Thomson  about two Berliners at the outset of Hitler’s war, who happen to be opposed to it. Adding to my anticipation, “Berlin”, based on the book by Hans Fallada, illuminates a small WWII story I had never heard tell of. How exciting!

Yet, upon completion, I was only left with two possibilities as to why, in spite of great acting, it is so dreadfully and painfully dull. Either, A, it’s oppressive lack of action mirrored the manner in which people had to scurry about in 1940 Berlin, or, B, it’s simply a terrible script. In truth, it’s probably a combination of both. Actor-turned-director, Vincent Perez, has accomplished the former as it is grimy, dark, brooding and oppressive. It makes sense that an actor with little directorial experience would prefer to set a mood – an overarching emotion – rather than give us a story that moves. The emotional arcs are there, to be sure. Given the stakes, it would be almost impossible to fail in that manner. But in Perez’ indecision over whether this is a David & Goliath tale, or a police procedural, he’s forgotten to give the audience something to hang on to.

But none of this is the fault of Brendan Gleason or Emma Thomson, who give it their all. Gleason, especially, is powerful in his intense quiet, and Thomson successfully conveys the silent seething of a mother affected by war. And, further, their interactions seem both of their time and timeless throughout. Daniel Bruhl is fine. I’ve never been a huge fan of his, but he is at least allowed to have an emotional arc here, which he accomplishes. But, alas, he is cast as the establishment antagonist, a role in which he seems to be perpetually stuck, and, in this film, that task just doesn’t carry enough weight.

High marks to cinematographer Christophe Beaucarne and production designer, Jean-Vincent Puzos, for creating a war-drenched city environment significantly more authentic in feel than the much higher-budgeted “Allied”. And Alexandre Desplat’s score (sadly not available on its own) tries like hell to fill in the ‘exciting’ without being intrusive, which he almost manages to do (no small feat).

Listen, I love mood pieces that are short on action or plot if they lead to an understanding or awareness that stays with me. Last year’s “sieranevada” and “Happiest Day in the Life of Olli Maki” are perfect examples. But I just can’t recommend “Alone In Berlin”. Perhaps if you’ve read the book, you might connect with it more than I did. But this is a perfect example of a bunch of terrific parts not quite leading to a satisfying sum.