I think most would agree that the previous high bar for affecting and unforgettable WWII films (or any war film for that matter) was set by Spielberg’s “Saving Private Ryan”. Twenty years later, a film has finally raised that bar. In my opinion, with the knowledge that I am not a Christopher Nolan accolyte, and without a trace of hesitation, “Dunkirk” is the greatest war film yet made (you could argue “Son of Saul” belongs in the discussion of recent war masterpieces, but let’s stick to English language films for  the sake of this discussion).

Eschewing the gore-filled realism of “Pvt. Ryan” (or “Hacksaw”), Nolan prefers to build anxiety, tension, dreadful anticipation and abject fear with practically no blood at all. He leaves the specifics of what happens to a body in the aftermath of war to the imagination. And, by focusing on the emotional and constant impact of “when will they hit us next”, he connects us, as close as any film has, to a basic, yet empathetic, understanding of how PTSD affects EVERYONE involved in battle. This is the film’s greatest and, ultimately, longest-lasting contribution to cinema. But that’s for long discussions/arguments over coffee, in the safe confines of our homes and restaurants after we’ve experienced the film. What about the film itself?

Well, again, counter to “Pvt. Ryan”, which had a very specific, and very Spielbergian narrative as seen through the eyes of one man’s journey (Tom Hanks), Nolan’s film has no singular narrative. Instead, Nolan somehow, in the span of ninety minutes, tells fifteen stories concurrently, all crystal clear in focus, and all harrowing. And, mirroring Churchill’s famous “We shall never surrender” speech given in the aftermath of Dunkirk, Nolan gives us those POV’s on land, on sea, in the air and, occasionally, and miraculously, from all points of view at the same time. This is less a story than an observation…or, rather, an emotional immersion. That it succeeds WITHOUT a specific narrative is what keeps us from ever getting comfortable, and via his ingenious time framing, we are on alert throughout. 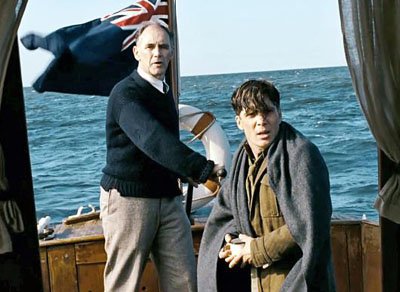 Looking back, I can’t imagine how difficult it must have been for an actor to survive “Dunkirk’s” filming. Wound tight as a drum throughout, even the least seen extras needed to feed/feed off of a sense of constant fear and anxiety. But, the acting is superb, even if there is as little dialogue in this film as there is in, say, “Gravity”. I wish I could point out any one actor as being more successful than another, but, in true British fashion, this ensemble piece has no holes. Even pop-star Harry Styles manages to carry his own weight. It certainly helps to have Mark Rylance, Kenneth Branagh, and Tom Hardy to guide us, but they are hardly more important or successful than, say, newcomers Fionn Whitehead, Tom Glynn-Carney or Barry Keoghan, none of whom have more than five previous credits to their names.

But the production elements are equally, or, perhaps, more important than the acting in this film. Hoyte Van Hoytema’s (“Interstellar”) cinematography is simply incredible (especially in its original 70MM – a manner in which this film really should be seen). His ability to put 70mm cameras in places usually reserved for tiny cameras is what traps our brains in these same spaces. The aerial scenes, which are better than any before, are worth the price of admission by themselves. And Nolan’s long-time production designer, Nathan Crowley, has created a world so real, so believable, that I’m quite sure Dunkirk will see a MASSIVE boom in tourism, just so people can be nearer to the visceral experience of the film.

But this is a film that fails without a believable sound design, and between Richard King’s sound editing and Hans Zimmer’s relentless score, we have one of the greatest aural cinematic presentations of war created. The actual sounds of war, in the past, have always been a series of loud bangs and screams. Not to dismiss the great work of those previous designers in any way, King’s design rewrites the aural experience of filmed war. More like “Das Boot” than “Pvt. Ryan”, the sound is almost always concentrated on one element at a time…a bomb dropping through the air, the roar of a fighter accelerating, a single shot ringing out. It allows for silence…silence that is filled by the sounds of our own breathing, our own racing heart beat.

As for Zimmer’s score…anyone who knows me is aware of my dislike for how much his scores either borrow from previous works by others, or his well-known tact of letting his staff create scores that he then manipulates and takes credit for. However, THIS score is so powerful, so spot-on, and, like Mark Isham’s score for “Beast of War”, so enmeshed in the action itself, the film just would not work without it. AND, lo and behold, he gives one of his former staff members, Benjamin Wallfisch, credit for the underlying ideas within the score, by using Wallfisch’s original notion as the composition laid over the closing credits. I’ve tried listening to the score out of context of the film, and it immediately returned me to that same feeling of dread one gets watching the film. That’s power.

So if you’ve read this far, you know I think this is one of the truly great films, certainly of this century. I urge you to see it in 70mm at best, and IN A THEATER at worst. This is NOT a film for a television, a tablet or (please, god, no) a phone. It is a work of cinematic art, and just like works of static art, there is a difference between having a postcard of it…and standing in front of it at a museum. The former experience lacks the ability to move you…the latter stays with you forever…just as this film will.

One thought on ““Dunkirk””