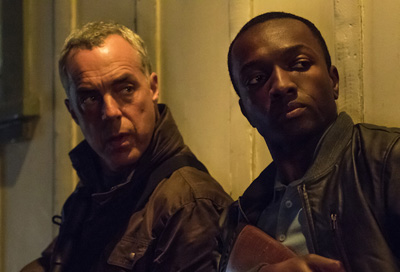 I recently binged all three seasons (30 episodes) of Amazon’s “Bosch”. Based on Michael Connelly’s novels, they revolve around the exploits of a fictional Hollywood homicide detective. As one might imagine, the three seasons shift in both quality and tone. And while it is a compelling show (especially the third, and most recent, season), it possesses an underlying, if not fatal, flaw – a failing I’ll outline in more depth momentarily. In the meantime, let’s get to the show’s various building blocks.

As an adaptation of Connelly’s novels, “Bosch” works quite well. The stories are complex, curiously convoluted and filled with misdirection and surprise – with dialogue that is always on point. Some of the characters verge on caricature, but that’s mostly down to the nature of the genre, not a failing of the script. Regardless, we care about these characters, for, even as they keep their personal lives close to the vest, their failings and tribulations are etched in their faces and in their vocal tone.

The shows are gorgeous to watch and, as you would expect from an Overmeyer production, a love letter to the city it calls home. Just as in “Treme”, however, Overmeyer’s love affair isn’t with what’s pretty about L.A. (other than the view from Bosch’s Hollywood Hills home), but with its dark underbelly. You would be hard-pressed to find any representation of LA this dark, dirty and unwelcoming. Even its gilded and gated mansions have a darkness about them. And, to push that even further, every scene has a blue sheen about it…as if in fluorescent light. If you’re thinking this sounds a lot like “Ray Donovan”, I can assure you that, in comparison, “Donovan” is a virtual tourism council postcard. The better example would be the desolate LA-scapes that dot the early scenes from “Drive”. Location scout manager, Robert Paulson, and his team should be given an Emmy for showcasing this uglier version of Los Angeles without pulling any punches.

But here’s where we run in to the aforementioned problem for “Bosch”. It wants desperately to be an old-school, noir-esque cop mystery. And the script presents it thusly. All that’s missing is for our lead, Harry Bosch, to say, in voiceover, “she walked into my life in the dead of night, and when she sat down and looked at me, I knew I was cooked…”. And if that’s how the entire production was presented, it’d be great. But they desperately want it to be as visually interesting/hip as…let’s say…season one of “True Detective” – just watch the opening credit sequence of “Bosch” to see what I mean. And, alas, if you’re going to demand your actors play it one way, it’s impossible to succeed at the other. As a result, by its third season – when it really starts to find that hip rhythm, Titus Welliver, stuck in noir mode, comes across as disinterested at best…stolid and lacking any investment at worst. And if he doesn’t keep you invested…there ain’t much point. He’s not bad, in fact, he’s a pretty good choice for the role. But all that caged rage he brought to “The Good Wife”, by the third season of “Bosch” seems disingenuous.

Not that the rest of the cast doesn’t succeed, they do. Playing the tough as nails, precinct- lieutenant, Amy Aquino is fantastic. Her connection to the environment, other performers and the stories is specific and a joy to watch. The rest of the main cast is, likewise, superb. Jamie Hector, as Bosch’s partner, is spot on, as are the long-suffering homicide pairing, “Crate & Barrel”, Gregory Scott Cummins and Troy Evans. Lance Redick plays exactly what he’s always played, but he’s magnetic in that role, so…enjoy. And special mention to Bosch’s daughter, Madison Lintz. Daughters in cop shows tend to be hero-bait. But, with a small storyline exception, Lintz is straight with her dad, filled with the realistic desire for independence that teenagers go through, while still very much loving her parents. Unfortunately, the smaller characters don’t help matters much. Steven Culp, in particular, plays the stereotype and not the reality (although, in his defense, he doesn’t get a whole lot of help from the script). And the bad guys are..meh. Reasonable, but flatly written and often flatly performed.

Directorially, there are some glaring inconsistencies, even within seasons…like, suddenly slow motion, or bizarre music interludes that never resurface. They’re the kind of inconsistencies you’ll probably not notice unless you binge all 30 episodes in three nights as I did – yes, I need a life, but they made me turn my head sideways like a dog hearing a strange sound.

Finally, there are some REAL problems with Jesse Voccia’s score…mostly in the way it’s utilized. It’s challenging and interesting music, but its used in the strangest places and then at the mos obvious times. It’s sort of all over the place. MORE IMPORTANTLY, the theme music, Caught a Ghost’s “Can’t Let Go”, is at least twice as loud as the rest of the show, so, when binging at 3am, be prepared to hit the mute button fast when that opening hits.

I wish I could overwhelmingly recommend “Bosch”. I DO recommend it, especially as it’s one of the few well-made old school cop shows out there, but only with the above reservations placed in to evidence. You might really like it, just keep in mind that as the stories get better and its presentation more vivid, your concern for the main character will wane.