“Their Finest”
Directed by Lone Scherfig 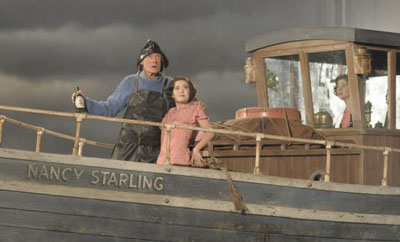 It’s Brit Week in the Singer media world, as I’ll be reviewing James Gray’s latest Brit epic, “The Lost City of Z”, and season 2 of “The Last Kingdom”, the Netflix/BBC co-production of the 9th Century English origin story, in the next couple days. Here, however, I’ll be discussing the WWII RomCom, “Their Finest”.

Lone Scherfig’s extremely British, and extremely quaint examination of life in London during the Blitz, “Their Finest”, has some terrific moments and deals with high stakes themes (obviously), both of which grounds the emotionally powerful film…most of the time. But more often than you’d like, Scherfig’s direction ventures in to highly emotional response, when a little more subtlety might have been more communicative. It’s as if there were three or four takes of a scene and, after witnessing the one that was over the top with tears or yelling, Scherfig thought “well, it doesn’t really fit, but, wow, that was some acting!” It’s a directorial choice that can be a little exhausting and doesn’t really fit with the rest of the film’s more contained, yet still crackling, bits. I was taught by an acting coach a long time ago…”if the actor tries NOT to cry in a scene, the audience will do it for you…histrionics take away that freedom” and that is quite evident here. Too bad…as it diminishes a couple of the very fine performances. Interestingly, in the movie within the movie, they DO maintain that axiom to great success….not a little schizoid in direction…uh, think “Downton Abbey” meets “Mrs. Miniver” (there’s the five-word quote for the adverts – except I would add) meets The Hallmark Channel War Flick of the Week.

HOWEVER, that doesn’t make it un-enjoyable, just…slightly confusing in its purpose. There are many things to recommend it. It’s very smart…it is about writers and moviemaking, the psychology of life during wartime, and what it meant to be a woman in a city without men. It is VERY intense at times, successfully representing both the daily life of London during the Blitz and the utter sense of chaos – or lack of control – over who lives and who dies from moment to moment in a British civilization that is based on a strict sense of order. And since Schefrig is smart enough to make the Blitz scenes more aural than visual, our relationship to that tension is well served (greatly aided in the effort by the spectacular work of cinematographer, Sebastian Blenkov and production designer, Alice Normington).

But, truly, the real reason to see this film is the performance of Bill Nighy, who simply cannot be bad in anything. Playing the aging movie star who is asked, over and over, to stoop to levels beneath his sense of self and status, Nighy is fantastic. Hilarious, heartbreaking and complete. In fact, the act structure of the film depends almost solely on his journey, even if he is not the protagonist. And while actual protagonist and antagonist, Gemma Arteton and Sam Claflin, respectively, are convincing as our bomb-crossed romantics (Claflin is particularly good), theirs is a romance of words, convincing in its slow burn, but SLOW nonetheless.

Much better is the “Living In Oblivion”-esque subplot…the making of a war picture called “The Nancy Starling”. From inception to exhibition, everything about those sections of the film work like fine-tuned clockwork, and are very, very funny. In addition to the performance of Nighy, each of the “actors” add a great deal to making this world both believable and good-natured. But alongside Nighy, the standout is Jake Lacy. To say anything about his performance (other than its success) would be to give away too much of the plot. Rachael Stirling, inserted as a very specific archetype of the age, is excellent as well, even if not given the freedom to explore her character in a way her skill deserves.

Rachel Portman’s score is a problem. Since the movie teeters ever so close to Hallmark-land, utilizing a score that accentuates emotion, rather than informing it, is dangerous. Many of those moments I described earlier, the less successful ones, are accompanied by fairly obvious (and BIG) scoring. I’m sure the thought was “well, it is a picture about pictures in the age of giant scores”. But, I think the film would have been better served if it saved those bits of music for the soundtrack of the fake film, and been subtler, quieter, for the real and terrifying existence that surrounds it. Regardless, it is evocative of the age and well written.

Listen, I really don’t want to suggest this isn’t a film worth seeing. It is. “Their Finest” is intelligent and adult in scope, treats the audience with respect, is very funny, and has some fine performances. Given that we are entering the dog days of the summer blockbuster season, films like this are to be rewarded. “Their Finest” is an excellent choice if “Guardians of the Furious Part 18 in 3D IMAX” is not your bag.

The trailer gives away a lot. Watch at your own risk…

3 thoughts on ““Their Finest””