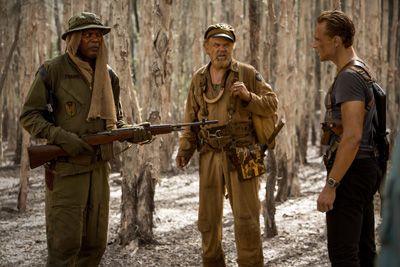 Given the horrible iterations of the “Kong” ilk, I walked in to my local multiplex with less than zero expectations for this film. But, I figured, it’ll look good, and who doesn’t want to watch John C. Reilly burn up some scenery for a couple hours? Well…well, well…lookee here…it’s pretty good, actually! It does exactly what it intends (even if it overreaches more than a few times).

So, what is it trying to do? Luckily not as much as previous “Kong” attempts. There is no voyage to New York City with an ape being flown in via helicopter, nor a misguided sexual misconnection between human and chimp. But what it DOES do is stick almost exclusively to the first half of the original 1934 script, which simultaneously made Kong out to be a villain and a sympathetic figure. Also, unlike later Toho Studio versions, nuclear proliferation isn’t the culprit for waking creatures from their slumber, which would be the easy way out. No, this version utilizes the closing days of the Vietnam War to introduce us to this prehistoric world. And by utilizing such tremendous actors playing the soldiers, and placing it in an historical context we can relate to (aided by a terrific opening credit sequence), it’s an easy thing to buy. It doesn’t hurt that the pace of the film is excellent, and that the surprise thrills are a surprise (I literally yelled out loud at one point – clearly, I’m an easy mark).

While it has assorted drawbacks, the most glaring is having far too many individual characters to care about (even for a film where there must be enough to kill off and stay on point). But for the most part, the acting is quite committed…with a couple sleepwalkers. I still have no idea why Hiddleston is even in the picture, and neither does he, apparently. He has one emotion throughout and it’s unclear whether that is his fault or the script’s – either way, it’s a role that could’ve been played by a monkey (actually, Kong has many more emotions than Hiddleston’s character, so…). The same can be said of the two most important scientific characters (Corey Hawkins and Tian Jing), who are supposed to carry some weight (if we are to believe the god-awful post-closing credits tag scene), but, hoo boy…they have NO charisma or personality…at all. Again, probably not their fault.

But that’s where the critique ends. Jackson, as the career soldier who is terrified at the prospect of the War coming to an end and having no enemy to combat, is note perfect. And Vogt-Roberts takes FULL advantage of the close-up-on-crazy-eyes-a-la-Sergio-Leone, so much so that I half expected to hear Ennio’s “Ecstasy of Gold” rise up. Let’s also give a nice round of applause to Brie Larson. She literally is given NOTHING to do in this film and somehow makes her character both three-dimensional and sympathetic. Even if this is a money grab, she at least puts maximum effort in to it. Additional kudos to both Shea Wigham and Jason Mitchell. Wigham is becoming one of our best character actors. The powers that be will probably never give him his own film, but as long as they keep using him, I’m happy. Jason Mitchell, who played Eazy-E in “Straight Outta Compton”, has a much smaller footprint here, but he is a large reason the film is able to span the gap between a bad film and a pretty good one. Finally, if there is one reason above all others to see this film, it’s the performance of John C. Reilly. Funny, heartbreaking, and sincere, he ties the entire film into a nice little ball of entertainment and gives the film ALL of its stakes.

And what about the monsters? About 85% of them are outstanding, especially Kong. Motion capture has come a LONG way since our first experience of Gollum/Smeagal in the LOTR saga. Kong is able to convey emotion and reaction rather than just be large and scary. The other creatures are mostly quite believable and/or terrifying. There are a couple utter misfires, but for the most part, we’re happy to go along for the ride. And I was overjoyed to see a couple shot-for-shot homages to the original Kong during monster-on-monster fight scenes.

A word about Henry Jackman’s score. It would’ve been easy for Vogt-Roberts to use a throw away thriller score with nothing but big scary sounds. But, instead, he uses a terrific composer who makes a sweeping soundscape with very specific themes – vaguely reminiscent of Howard Shore’s “Lord of the Rings” trilogy themes. It’s actually one of the better scores so far in 2017. Eminently listenable on its own, and, more importantly, spot-on for the imagery and emotions on-screen. I give you these cuts as examples: “Marlow’s Farewell” and “Heart of Kong”

Listen, this is NOT one of the great films of the year, but it is most DEFINITELY a fine choice to make given the drek that normally comes out this time of year. I give it an opposable thumb up!