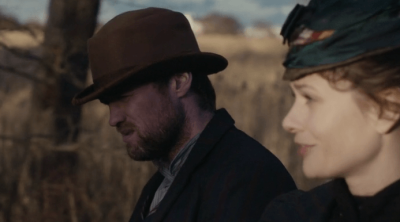 Fully aware I’m one of about ten people who watched this show, I write this in hopes I will convince a few of you to give it a go. It is intelligent, brilliantly acted and possesses writing that is simply beautiful – in both its phrasing and dialogue. And there are a sum total of only thirty-six episodes in its now completed five seasons.

Taking place during the late-1800’s in the slums of Whitechapel, London (whose history at the time included the Jack the Ripper murders, the early settling of the Jews of Eastern Europe, and one of the worst train disasters in British history), the show revolves around the members of the police force that failed in their endeavors to capture that infamous murderer and are tasked with bringing order to one of London’s most dangerous enclaves. As a result, the entire show carries with it a weight…an underlying remorse…that informs something much greater in import than each season’s plot and arc. Add to that some of England’s greatest actors speaking words and paragraphs that sound not a little like modern Shakespeare, and you have something really special.

This is not to say that it is all good. Some of the storylines venture in to melodrama (most notably in the first two seasons), and it moves at a snail’s pace, which I personally love, but could be viewed as boring by some. The setting occasionally suffers from having the look of a period drama with a smallish budget. And one or two characters have moments of two-dimensionality. But, these, for me, are minor, and infrequent, occurrences.

But the acting, chewy as it might seem in a world that rewards mumblers with big contracts, is amongst the best of any series in the last ten years or so. Headed by the incredible Matthew Macfadyen, it truly feels like watching a performance at the Old Globe. I’ve been a fan of his since his “MI-5” days, and, unless he has chosen to stay away, I cannot understand how he is not used more often on the big screen. The eyes of his Edmund Reid speak directly to horrors both witnessed and created, and the power of his voice is unparalleled by actors his age with the exception of, maybe, Ralph Fiennes or Mark Rylance. His colleague, Bennett Drake, is played by everybody’s favorite “Thrones” character actor, Jerome Flynn (Bronn). But here he shows his range, as he possesses NONE of the irreverence or sarcasm of Bronn. No, in Ripper Street, he is sorrowful, hopeful, caring, and vicious…sometimes all in one scene. These two make the show what it is. Other main and minor characters are all very good, sometimes extremely so. Exhibit A being Jonas Armstrong, whose turns in Seasons 4 and 5 are award worthy. In fact, Episode 3 of the final season, which revolves around Armstrong’s character, is brilliant film-making and I was spellbound throughout…feeling quite certain I was watching cinema, not television. But, really, there are no noticeable flaws in the performances, only an occasional misstep by a minor character.

And then there’s the look of the show. Whilst they may not be able to utilize expansive locales, they more than make up for it with set dressing, costuming and FX. In fact, my earlier complaint is just as likely to be a production choice by the show’s creators as a means to communicate the claustrophobic nature of the Whitechapel slum, housing, as it did, a large concentration the city’s population within its tiny alleyways. Regardless, it all works…and works well.

The music is quite good and, in many places, exceptional. The main theme, which sounds like a perfectly good procedural theme, seems, by the end, to be out of place. And, as you would imagine, Dominick Scherer’s music becomes more and more cinematic during the later episodes. So much so, that Season five has a completely reconstructed title theme. But, the music successfully emulates Paul Leonard-Morgan’s work for both “MI-5” and “History of Scotland” (one of the great television scores) in its acknowledgement of our connection to, and the emotions of, these characters. Any way you look at it, the music not only enhances, but entirely fits the world of the show.

As with most BBC episodic offerings, at only eight or six episodes per season, the show’s stories are filled to the brim, with no time to meander outside the main. And, best of all, the stories get better as the show’s seasons progress. Seasons 4 and (especially) 5, which if not for Amazon Studios intervention would have never seen the light of day, are particularly dense and satisfying. As the last episode pulled in to the station, I found myself melancholic and VERY sorry to say goodbye to Detective Edmund Reid’s Whitechapel. To me, “Ripper Street” will go down as one of the most underappreciated and undervalued television series ever produced.

(The following trailer was made by a fan, but is much more suggestive of the show I experienced than any of BBC America or Amazon’s official trailers):