This might be, from top to bottom, one of the most affecting group of Oscar nommed documentary shorts in history. Don’t get me wrong, each year’s nominated short docs are greatly affecting in some manner, with one or two standing out as exceptional. But this year…all of them will punch you squarely in the gut…and the brain. Alas, I fear there is a direct correlation between the the extreme sense of sadness and frustration presented by these films and the abject shitter we’ve placed our world in. <sigh> Okay, let’s get to it. Here are the 2017 Oscar nominees for Documentary Short.

A human and direct look at the terrible question of when hospital procedure stops being humane and, instead, becomes a form of torture. And, at that time, who gets to make the end-of-life call? The lens focuses on single ICU, and four to five patients (and families) faced with very few options, especially as there is little to no hope of anything but a decline in their conditions. The film’s conscience belongs to an ICU doctor who clearly believes that, at the very least, having the EOL discussion is an ethical imperative. And the film is very successful in illustrating the vagaries, complexities and personal dilemmas built in to these circumstances. My only qualm about the otherwise spellbinding twenty four minutes of “Extremis”, is that it did not, to me at least, appear to have a specific point of view, instead remaining as neutral as possible, and seeming to end arbitrarily. But others may just as easily have seen a specific POV that I missed, or think I’m missing the point in looking for one, which is entirely possible. Regardless, it in no way detracts from the remarkable effect one gets from bearing witness to these stories and questions, as Krauss manages to get his cameras in incredibly intimate spaces without feeling overly voyeuristic, which is a feat unto itself. An excellent, and worthy, nominee. It’s on Netflix now.
______________________________________________________________________
“4.1 Miles” (Greece)
Directed by Daphne Matziaraki

Matzairaki has created something extraordinary in “4.1 Miles”, managing to accomplish in just under a half hour what “Fire At Sea” could not in three times that length (not as effectively, anyway). Like “Fire At Sea”, the film takes place on, and just off, the coast of a European island (in this instance, the Greek isle, Lesbos) which finds itself directly in the path of freedom, and danger, for hundreds of thousands of immigrants fleeing war-torn countries in northern Africa and the Middle East. Attempting to cross the 4.1 miles from Turkey in to Greece, these immigrants are packed in to barely seaworthy boats, well past capacity, by crooked smugglers, with, more often than not, catastrophic results. Also like “Fire”, the camera spends the majority of its time observing the efforts of a rescue force, here a native islander with a seafishing vessel and a small crew, forced out to the straits several times a day to help these unfortunate people. But “4.1 Miles” seems more immediate, more visceral in tone. Such that I was grateful I did not see this in the theater (although I did see it on a 60″ TV – talk about first world dichotomies), because, eight minutes in, something happens in the film that caused me to howl with tears. Quite literally. It is remarkably shot and the final tableau (just before the credits) will make you draw your breath aloud. I sat still for a good five minutes after the film’s completion. “4.1 Miles” is necessary, overwhelming and superb documentary filmmaking and, luckily, you can watch it online here. Required viewing, in my view.
______________________________________________________________________
“Joe’s Violin” (Denmark)
Directed by Kahane Cooperman & Raphaela Neihuasen

So, you know the saying to always bet on the Holocaust to win? Well, here’s irony for you: this film, about a survivor, is the only uplifting film of the five. And, boy oh boy, did I need it after seeing the other four. It’s a lovely little film. Doesn’t break any new ground, nor does it intend to. It’s simply a non-fictional version of “The Red Violin” through the eyes of two incredibly brave and strong individuals, one old, one young,  who have both had to overcome adversity to survive and thrive. The peak emotional moment of the film feels a little forced, or shoehorned, and the girl’s journey seems shortchanged given the incredible history of the elder violinist and his violin. But those are quibbles and shouldn’t keep you from enjoying this film, which, luckily, is currently viewable online and will help salve the wounds created by these other four fine films. Seriously, if you’re going to watch these in a sitting, save this one for last.
______________________________________________________________________
“Watani: My Homeland” (UK/Syria/Germany)
Directed by Marcel Mettelsiefen 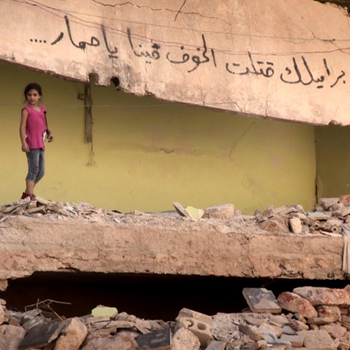 The longest of the five, but one of the most impactful, Mettelsiefen’s record of a family’s journey from the front lines of Aleppo to new lives in Goslar, Germany, is excellent. Over the course of three years, we see how the fighting, the death around them, their passage to Germany, and how their new life both amazes and changes them – with the ghosts of Aleppo still fresh in the forefront of their thoughts. Most disheartening, for an American audience, is the contrast of how fully welcoming the people of Goslar are to these unfortunate souls…with housing, a basic salary, schooling and no discrimination….with our xenophobic rhetoric and rules. And, in terms of film-craft, Mettelsiefen  has chosen his focus wisely. The girls are imaginative, creative, communicative and unafraid to show the effects of their childhood existence. In just thirty-nine minutes, the film manages to prove how much good there is in doing good. A masterwork. Alas, I was unable to find the film online, but here is the trailer.
______________________________________________________________________
“The White Helmets” (UK)
Directed by Orlando von Einsiedel

Screened right after the devastating “Watani”, one could be forgiven for having trepidation about watching another film focused on the carnage in Aleppo. But where that film centered on the journey out of Aleppo, this film puts the camera right in it…quite literally. Centered around a group of rescue workers, known as “The White Helmets”, you get a completely different approach that leaves you with the exact same awareness….that those from Syria, who only wish to live their lives, are no different than us, and are deserving of our compassion, admiration, empathy and kindness. The ‘Helmets’, in particular, will amaze you with their courage and respect for life. They see where a bomb has landed, get there immediately, and at great risk, crawl through the rubble, trying to save as many people as possible. And it’s heartbreaking to witness how far ISIS and Russia (as Assad’s ally) are willing to go to use civilians as pawns. I’d rather not give too much away. It’s on Netflix now so you can, and SHOULD, see it as soon as you can.