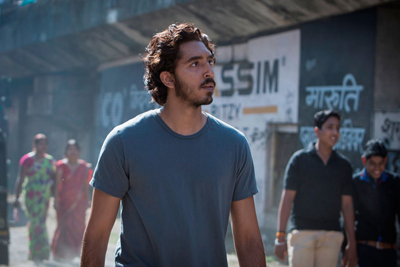 I was not looking forward to seeing this film. In fact, the only reason I screened it was to complete my due-dilligence as a SAG Award voter. And, like “Hidden Figures”, my negative preconceived notion regarding “Lion” was based on the trailer I saw in the theater. It looked to have all the ingredients of a typical holiday/family/awards-eligible release: an incredible true story, a cute little kid, award-winning actors…crying, and incredible vistas of exotic locales. But, while I think it left some of the meat of the story off the screen, I’m happy to say “Lion” is a very good film.

Mostly the film succeeds for three reasons…the cinematography, the editing and the performance of an eight-year-old actor named Sunny Pawar who plays the younger Saroo, the film’s protagonist.

This film is gorgeous…and not because of how beautiful India is, but because of how beautiful D.P. Greig Fraser (Zero Dark Thirty, Rogue One) makes the ugly places look. It’s an extremely visual film. Train stations, dirty sidewalks, orphanages…all become hypnotic under his lens. And director Garth Davis, to his credit, allows the camera to linger on these places so we can take them in – while never allowing the film to lose it’s considerably growing momentum.

But the boy! Sunny Pawar, who has never acted prior to this film, manages to steal your heart within seconds. Now, as I’ve said many times, what I believe makes child actors successful is usually not their “talent”, but a combination of earnest and real reactions to previously unfelt emotions, a director’s ability to place a child in a situation and elicit those emotions with proper context, and proximity to older actors who are patient, understanding and knowledgeable. But Pawar is so human that absolutely none of the artifice or precociousness that affects other child performances comes in to play here. It’s a quiet and subtle performance, no matter how accidental. But he’s not alone. The half of the film that takes place in the India of Saroo’s childhood is phenomenal, in large part because of the numerous wonderful child performances.

Alas, once we get to Saroo’s life in Australia, especially as an adult, the movie seems to bury the lead. Saroo’s investigative journey to rediscover his original home is what makes the story so interesting…and yet we spend most of the second and third act watching his relationships ebb and flow – both to his girlfriend and his Australian family. It’s unnecessary. In “Cinema Paradiso”, for instance, we spend exactly three minutes with the adult ‘Toto’…the minimum necessary to drive the need to recall…to reclaim, which allows us to get to the guts of the story as quickly as possible. Dev Patel, in the elder Saroo role, is fine. He can’t really handle the wide swath of emotional tumult the director and script ask of him, but he certainly doesn’t hurt the film. Rooney Mara is perfectly satisfying in a role that feels like an add-on due to focus groups – the story does not cry out for a romantic interest. And Nicole Kidman, as usual, excels in her role as Saroo’s adoptive mother.

Dustin O’Halloran & Hauschka’s score is lovely. Of course, it is VERY reminiscent of Johannsson’s “Theory of Everything” (the second most ripped off score in the last couple years, trailing only “Interstellar”). Nonetheless, it very much helps the film stay on it’s quiet and subtle tracks, rather than devolving in to manufactured dross – which it could have quite easily.

“Lion” is a beautiful, and rewarding, little film made on a grand scale. And, while it relies on its adult stars a little too much for my taste, it is absolutely worth seeing. It accomplishes its goal of reminding us what it means to be part of a larger world…while always striving to understand what and where “home” is.