“Fantastic Beasts and Where to Find Them”
Directed by David Yates 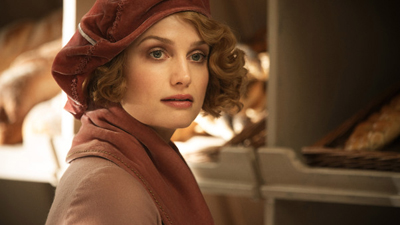 With the disclaimer that I never read the books, I’ve found the Harry Potter film series to be  delightful, charming and often wondrous. They each have epic plots and stakes, take place in a fully realized alternative environment, are filled with some of our greatest contemporary adult actors, and depend on the reactions of fully invested children to convey emotion to the viewer.

“Fantastic Beasts”, the latest filmed concoction from the mind of J.K. Rowling, while not a prequel per se, has many of the same ingredients save one: children acting as protagonist. And that’s where it falters, for me. The first two acts, while visually arresting, just seem so much less interesting without youthful wonderment. This is partially mitigated by the introduction of two secondary protagonistic characters which, gratefully, makes the third act and coda extremely charming. But it sure takes a helluva long time to get there.

The leads (Eddie Redmayne and Katherine Waterston) try like hell, but you really have no attachment to either of them at all until the very end. Which is not to say they don’t try like hell. And Colin Farrel (who is undercut by a RIDICULOUS surprise reveal at the end of the film which drew derisive laughter during my screening), Samantha Morton and Ezra Miller deliver the serious stakes of the film quite successfully. But Dan Fogler and Alison Sudol are spectacular. Maybe because they are the most child-like…and Rowling is, apparently, at her best when fleshing out her young characters. On the negative side of the performance coin, however, there are some TERRIBLE casting choices. I don’t have any idea what movie Carmen Ejogo thought she was in, but it ain’t this one. Her performance is so contemporary, it throws you out of the film every time she makes an appearance. And Jon Voight, who has made a comeback for the ages in “Ray Donovan”, takes a step or two back in a boring and two dimensional appearance here.

The film looks incredible. It recreates 1920’s Manhattan with grace and accuracy…even while it’s being demolished. And the creatures, used more for humor than plot (like, say the aliens in “Arrival”), are beautifully imagined and conceived. Finally, James Newton Howard’s score is adequately epic without being interfering – and has just the right amount of reverence for previous Potter musical themes.

So, while a mixed bag, when all was said and done, I was quite charmed by the film. It’s a bit of a slog…but a gorgeous slog with a tear-jerker payoff. Recommended.