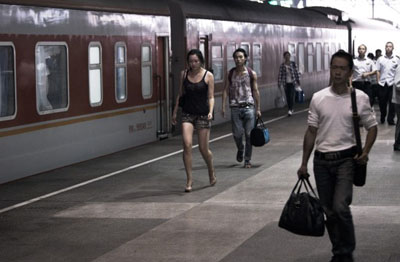 Jordan Schiele’s debut feature is a small, road movie about a woman searching for her child, accompanied by a young male stripper. It will do nothing to please Chinese tourism muckety-mucks, as it shows the ugliest side of urban Chinese culture…with its accomanying unbearable and unrelenting heat and humidity. You’ve never seen so much sweat in a film, and while it is incredibly uncomfortable to see glands working overtime on the big screen, it is an effective device to illustrate the giant disparity between the haves and the very have-nots.

I’d prefer not to give any of the plot away, but the third act (which takes about fifteen minutes too long to get to, in my estimation) is actually quite effective. And effective in a very human and realistic way. While it could easily have descended in to Hallmark saccharin, Schiele avoids that trap and gives us a satisfying ending without undermining the rest of the film.

Huang Lu, as the panicked, and beautiful, go-go dancing mother, is a ball of rage, yet never loses connection with her nurturing maternal feelings. It’s the kind of role, that if it were a Hollywood flick, would bring award talk to whoever played the role. However, Luo Lansha is the wonder here. Fantastic as the lonely, longing and post-adolescent drag queen, he acts as the true heart of the film, and succeeds wildly.

This film won’t win awards or leave you challenging your views about the world. BUT, it is a slice of very real life in a world we don’t normally have access to, is absolutely relate-able, and has terrific performances. Just make sure the A/C is working wherever you watch it.