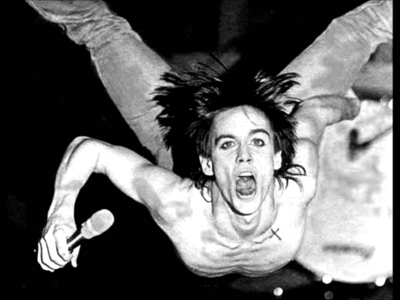 There is a quote in Jarmusch’s effusive documentary about The Stooges, spoken by Iggy Pop, that goes something like this: “When I look out at [current] audiences that come to see The Stooges, I see people living as adults who have kept the child they were inside of them.” Paraphrasing as poorly as I’m certain I am, this best sums up what makes “Gimme Danger” so enjoyable. Whether or not you are a Stooges fan, if you’ve kept a sense of the freedom you garnered from the discovery of the first music you were able to call your own, you will connect with this story.

Using interviews with Iggy and other members of the Stooges (in all its incarnations), concert footage & stills, and various ephemeral film footage, Jarmusch gives us the story of this band from its earliest inception to the current day. And while you may think this will be a film about Iggy, as I assumed at its outset, it is not. It is a film about a band that attempted to swim through the world of the late sixties/early seventies record industry, long before it knew how to hold its breath…and in many ways, succeeded even as they failed commercially. And while that may seem like well-worn subject matter, Jarmusch is a good enough filmmaker to make it seem fresh…and funny…and heartbreaking…and adequately loud. Of course, having someone like Iggy Pop tell the story certainly helps. And, largely because of this, the film flies by and you leave wanting to immediately put “Search and Destroy” on as loudly as possible (as I did once I was in my car).

This is not to say there aren’t issues with the film. There are. Jarmusch re-uses many pictures and film clips throughout, taking us out of the chronological nature of the story, now and again. He occasionally lingers too long, visually, on a talking head. He also goes to a title card a little too often for me…asking us to read more than is necessary, as if overly concerned we’ll miss something. And, overall, it’s a little too close to a straight PBS bio-doc than we might have hoped from someone of Jarmusch’s abilities and imaginings.

But, the biggest issue, I found, was his assertion in the first two minutes of the film, that The Stooges were the “greatest rock and roll band ever”. While this may be his opinion, it flies in the face of such a factually told tale…and you spend more than a few minutes wondering if a) making the statement was necessary, b) if it was meant to add levity to an already amazing, if irreverent, tale, and c) if he intended you to spend the next few minutes listing all the bands that you think were greater.

These minor flaws aside, “Gimme Shelter” IS a wonderful story about one of the more IMPORTANT bands in the history of rock, if not the greatest rock and roll band ever. Because what cannot be argued is that without the Stooges (and MC5, and The NY Dolls), bands like Joy Division, Gang of Four, The Pistols and The Buzzcocks (and hundreds of others), may never have found their voice in such a successful manner. Listen to “I Wanna Be Your Dog” or “No Fun” and tell me you don’t hear the BritPunk of a decade later. Or maybe you don’t care. Regardless, the film illustrates why it matters in a very entertaining manner.

One thought on ““Gimme Danger””