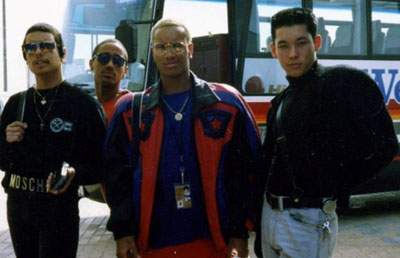 There are two types of bio-docs. The first has a certain filmcraft and style which illuminates the subject in a way that heightens the viewers’ emotions. The second simply has a subject that is too interesting to ignore. Of course, rarer still, is that unicorn of bio-docs, which has both of the above. The heart-breaking and joyful documentary, “Strike A Pose” fits squarely in that second category.

The film documents the lives of the male background dancers from Madonna’s 1990 ‘Blond Ambition’ tour. From the moments they were first cast, to their current situations, we get a very personal portrait of what it means to be young and filled with dreams of long-term success, bright-light adulation, and the realities (whether they be harsh or positive) of what happens after the those lights go down. As someone who has performed major roles in long Broadway tours, and who has experienced, first hand, how the heady optimism of the moment mostly leads to unrealized goals, I assure you the directors have nailed that sense of nostalgic reality.

However, what makes this film so successful are the actual stories…and secrets…of these men. As a film about gay culture, club life and the HIV/AIDS epidemic, from the late eighties until now, the portrait painted of these involuntary symbols of the “out and proud” movement, is must see viewing. The weight of this, the lack of privacy, the mass-cultural manipulation of that privacy, and the manner with which they choose to communicate the results, all add up to an experience that will require you to bring an entire box of tissues in to the theater.

The filmcraft is fairly paint-by-numbers, hitting all the important points in a fairly basic structure. And I wish documentary filmmakers realized that we never have to hear the question asked to understand the answer. It’s always felt so intrusive to suddenly hear a disembodied voice ask a very loaded question. The answer will infer the question…and besides, in a good documentary, the question asked, is never really the question answered – or else, why keep it in the fim? Worse, still, the director, in this film, sometimes interrupts a response, when simply letting the camera linger would be much more effective. That said, these are tiny moments in an otherwise stellar doc.

I won’t ruin any of this film for you by pointing out specific moments, just know that the dancing in it, both then and now, is extraordinary; Madonna is never the focus, merely the beginning of the story, which is a relief, since it is not her story to tell; and, most importantly, you will FEEL. Highly recommended!