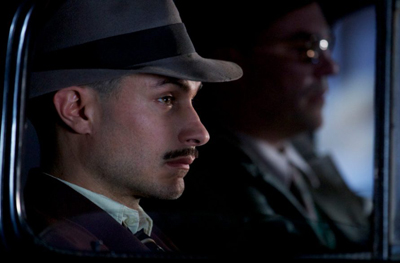 Oh Pablo. You do know how to tell a story in the most prosaic…and bizarre ways! And this film can only be described as prosaic and bizarre. Let me see if I can describe the style for you…imagine a classic 30’s film-noir caper, told in at least 50% voice-over, and expressed using the poetic influence and dramatic nature of Neruda’s poetry. Oh…and a self-consciousness that allows it to howl with humor. Yeah…that’s about right. And, man, it really, really works.

The pacing is suitably intense, the script probably reads as good as it plays, and the photography perfectly encapsulates the flat, yet techni-chromatic, feel of movies from the fifties. In fact, it uses fifties stock footage for some of its exteriors to hilarious effect.

I’ll need to spend a few more days with my memories of it to ascertain what, exactly, Larrain’s view of Neruda ultimately is, as we are shown a Neruda who is fundamentally artistic, deeply flawed, shockingly human, and often bloviating. And, yet, somehow Luis Gnecco’s performance of Pablo Neruda makes all these counter-personas add up in to one very believable entity. But it is Gael Garcia Bernal’s detective that owns this film. It is his voice that acts as a reverential, yet hilariously irreverent, narrator – in much the same manner as the disembodied storyteller of Mariano Llinas’ amazing four-hour epic “Historias Extraordinarias” (a film squarely placed in my Top Ten all-time cinematic experiences). By the end of the film, you are as invested in Bernal’s Detective Óscar Peluchonneau, as you are in the title character.

Alas, Federico Jusid’s score has not stuck with me, which doesn’t mean it’s not good. In fact, I’m guessing it was excellent since a) I don’t remember it as being bad or intrusive, b) I loved the drama of the film and that is always heavily influenced by a successful score, and c) he composed the score for another of my Top Ten films, the original, Argentine version of “The Secret In Their Eyes”.

This film is Chile’s official Oscar submission, and while the Academy will never be able to explain how Mr. Larrain’s “The Club” was not nominated last year to my satisfaction, he should have no trouble getting this one in to that five-film exclusive club. Make sure you see it.