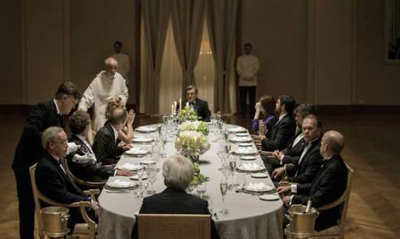 Rarely has a movie of such big ideas  been told in such a small way. This brilliant and sumptuously shot dark-comedy, tackles no less of an issue than worldwide income inequality and G8-induced austerity measures. But, not to worry, it is anything but an academic treatise. Instead, it wraps itself in a very simple, yet never dull, whodunit.

The script, extremely quiet script, moves at a…thoughtful pace. There is a whiff of “Being There” to it, which I found intoxicating. A teeny bit disappointed by the ending, but certainly not enough to assuage my recommendation of it. A couple members of the screening thought it was too slow, yet I was not bored for a second. This may have been helped by the cinematography. Shot in vivid color in an almost wholly black & white atmosphere and setting, it’s so clear, it almost hurts.

The acting is a bit of a mixed bag…the performances by the leads, especially the great Toni Servillo (“The Great Beauty”, “Il Divo”) and Daniel Auteuil (“The Valet”, “My Best Friend”, “Cache”) are pretty much perfect – even the spaces between the lines are perfectly portrayed. As the embodiment of two extremes, their time on screen together crackles with quiet intensity. Pierfrancesco Favino, another Italian, is also superb – even while his character is a bit vague. The English and American members of the cast fare much worse. They seem to not know how to relax in to their roles and thus come across as much less three-dimensional. Lucky for us…Servillo is on camera about 95% of the film, so…

And then there is Nicola Piovani’s gorgeous score…matching the beauty of each shot, it is the perfect combination of classical orchestration and emotional attention to detail. Phenomenal.

Listen, it’s difficult for a film made up, almost entirely, of heady discussion to be perfect…but it’s close enough not to miss seeing it when it rolls your way.

Can’t seem to find a subtitled trailer, but watch this anyway…beautiful.