“The Infiltrator”
Directed by Brad Furman 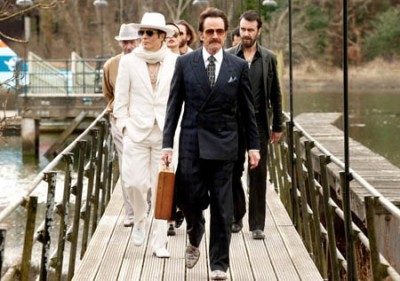 “The Infiltrator”, a well-directed and tautly-written Bryan Cranston vanity piece, is a fine addition to the pantheon of  Undercover-Cop films that dot the cultural landscape. While it doesn’t reach the heights of “Serpico”, “Donnie Brasco”, “Hard Boiled” or, my favorite, “Deep Cover”, it does keep the audience on its toes and guessing until the end.

Brad Furman (who directs Ellen Sue Brown’s screenplay) seems to be aware that the best thing about an undercover film is its characters. The individual members of the infiltrated organization must be both human and terrifying yet in possession of a unique and distinct voice. While the infiltrators must be a little bit crazy, a little bit terrified and utterly believable. This film successfully embraces these characters and their characteristics, and never gets too bogged down with machinations, actions or clever plot conceits. As a result we get to sit back and ride some terrific performances.

Leading the pack is Cranston. He is, as you would expect, excellent. I must say I’m beginning to see more similarities than distinction in some of his roles, so I never really forget who I’m watching (as I did in the recent HBO Masterpiece, “All The Way”), when I wish I could. But it’s a small complaint. He pulls off a very tough set of realities. All the bad guys are fantastic, especially my old friend, Yul Vazquez. Creepy, chilling, androgynous and dangerous, Vazquez owns the screen when he’s on it. Benjamin Bratt does a great turn here, as well, as a refined, yet brutal drug-lord. But Bratt and Vazquez are certainly not alone in draping the film with the necessary anxiety and tension. John Leguizamo is hilarious, if not quite as vicious as you’d like. And Diane Kruger is fascinating to watch, reminiscent of Jessica Chastain in “A Most Violent Year”, or Jennifer Lawrence in “American Hustle”.

The song licensing is pretty strong, so the soundtrack keeps you well-ensconced in the right time period. But, Chris Hajian’s score is even better. Subtle, churning and hypnotic, it does all the right things without being overbearing.

This is in no way a perfect film, it lacks the ease of chemistry that make those previously mentioned films stand out. It sometimes lurches, when it should fly, BUT it is engrossing, well made, extremely well acted and very, very intelligent. And in a season when those attributes are sacrificed to the altar of merchandising and commercial tie-ins, it should be rewarded with your ticket-purchasing dollars.

No trailer…alas, it gives WAY too much away.