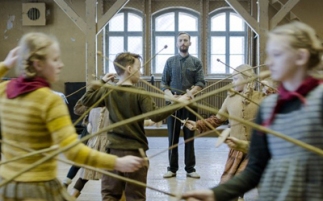 As I compress my viewing of films to match the onslaught of awards season, I am faced with an undeniable truth…foreign language films make up a large percentage of my Top Ten movies of 2015. And just when I think that percentage can’t grow any higher, I screen another. “The Fencer,” a small film about what it means to live a “normal life” under the specter of Stalin’s secret police in post-WWII Estonia, is simply stunning and a worthy nomination for the Foreign Language Golden Globe.

It’s certainly not a new story, or even an original telling of that story. But the script holds sway thanks to an avoidance of sentimentality (excepting the film’s unnecessary coda) even when surrounded by dozens of cherubic children holding their foils made of branches. The earnest portrayals and sky-high stakes, along with the dilapidated-perfect art direction, make this a very easy, and tear-filled watch.

The performances are terrific, led by Mart Avandi, whose eponymous character grounds the proceedings. His love interest (and conscience) is expertly played by one of the most naturally beautiful women you will ever see, Ursula Ratasepp. The kids are universally great, none more so than the astonishingly expressioned Marta, played by Liisa Koppel.

Also, there is something so charming about film scores from smaller international markets. They make so much more with less than do their Hollywood counterparts – utilizing simple counterpoints voiced with only two or three instruments. Always intriguing and always listenable, Gert Wilden Jr.’s work is an excellent example of this phenomenon.

“The Fencer” is a very, very good, possibly great, feature and, although it has the misfortune of being produced in the same year as “Son of Saul” and “Mustang” as far as Awards are concerned, it climbs in to my Top Ten with ease.

One thought on ““The Fencer” (Estonia)”