“Best of Enemies”
Directed by Robert Gordon and Morgan Neville 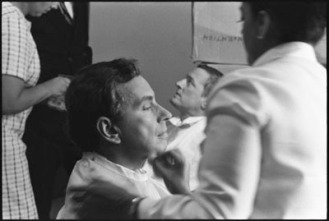 This is the tale of how it all began…the “all” being the beginning of the end of “objective” news on television. Documenting the the genesis of the famous ABC News debates  between William F. Buckley, Jr. and Gore Vidal during the 1968 Presidential Conventions, it portrays all the snap, crackle and pop of opinion over the substantive, yet bland television journalism of the era.

But it’s only 30% historical dissertation. The soul of the film lies in the adversarial relationship between these two intellectual giants. Their usage of the English language as weapons (instead of just screaming over each other, as is the current choice for on-camera opinion mongers), is lyrically magnificent, each phrase acting as a swing of the sword, only to be parried and blocked by an even more precise missive.

As a movie, it moves at an engaging clip and is never remotely dull, as you’d think a doc about talking heads might be. The usage of ’68 Convention news footage, home movies, television appearances and interviews of the subjects fill in the all the  contextual spaces. And the lead-in to the third act is astonishing, and reminds you why they may be better remembered more for the legacy of these debates, rather than for their individual, and considerable, accomplishments. That third act also serves as your GPS to how our news sadly navigated from their to here.

One of my favorite docs of the year and a worthy member of the Oscar Nominated Short List, this is heady stuff. But, if you, like me, long for the days when pundits  knew what the word punditry actually meant…”Best of Enemies” should not be missed.