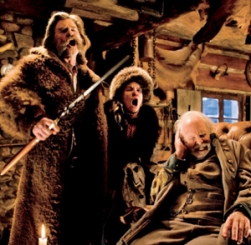 I walked in to the packed Music Box Theater for the first screening on Christmas morning having no idea what to expect. My parents had made it clear that “every” review they’d read said it was “horrible.” But I don’t think Tarantino has ever made a film that either my parents liked, or would sound like something they’d want to see after reading whatever it is The New York Times or The New Yorker had to say about them. But the crowd was excited and expectant and, with the newly built 70mm-capable screen in front of me, the lights dimmed and the Overture of the new score from my hero, Ennio Morriconne, began to play. What followed was three hours of intense imagery, phenomenal acting, absolute hilarity, over-the-top violence and perfect story-telling. In short, one of the most entertaining films I’ve seen in a really long time. Listen, this is not high art…it’s simply a gripping tale told in the plainest language possible, with some INCREDIBLE photography and hyper-realistic acting and action.

But it’s the script that carries this throughout it’s considerable length. I think we too often forget how funny Tarantino is..and this is VERY funny…more so even than “Django”. But he never has his actors tell jokes…just perfect codas to deeper discoveries. Here he has taken the thinnest and most basic and iconic Western plot and developed it into a mesmerizing look at post-Civil War attitudes and platitudes, and shows us, in a way, how little we have changed and, yet, how capable we are of affecting change. That may sound like a reach, but I’m pretty sure that’s what he was going for, and as far as I’m concerned, he was successful.

You know the old adage “there are no small roles, only small actors”? Well, here is your proof. This movie fails terribly if even ONE of the eight characters doesn’t pull his weight, yet they each do. Especially Goggins and Roth. But Demian Bechir, who has about five lines, is essential and perfect. And while Jennifer Jason Leigh and Kurt Russell, are note-perfect, as well, this movie belongs to Samuel L. Jackson. Tarantino smartly gives almost every monologue to him and it is no overstatement to say Tarantino’s words are like Shakespeare in Jackson’s veteran hands.

Keep in mind, the violence could NOT be any more visceral…and yet it is all placed for maximum comic effect (and is reserved for human characters, so those of you who can’t handle animal violence in the cinema are safe). But there is not one moment of violence that did not fit or felt out of place. In essence, he has taken the old conceit of the Western – that the bad guy had it coming to him – and turned it on its ear. I cannot explain that comment without giving away plot points, so just know it’s a new way of looking at the Hollywood Western mythology…and one that works for our “in your face” culture…and, again, certainly not for my parents.

And then, as mentioned, there is new music from Ennio Morriconne. Sad to say it’s not a great Ennio score, as it’s a little derivative and devoid of the variety of themes that grace most of his work…but there are moments that are pure bliss. Tarantino also, as you would expect, wends some songs through the film, which work well.

Listen, the guy gets it, and even if he comes across as egotistical….since we’re told over and over again, this is “The Eighth Film from Quentin Tarantino”…it’s that ego that allows him to follow through on impulses that other directors might be talked out of so that my parent will go see it. They won’t.