“Star Wars: The Force Awakens”
Directed by J.J. Abrams
THERE WILL BE NO PLOT SPOILERS IN THIS REVIEW!
(but I will be mentioning the quality of performances, which might, in and of itself, be more than you want to know…okay…good?) 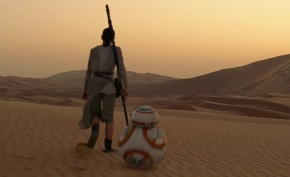 Now that we got all the assurances out of the way, I can tell you, with no reservations whatsoever, that this is a terrific action movie and a wonderful reclamation of the franchise, after the disastrous Prequel Trilogy. Most importantly, to me, anyway, Abrams and Kasdan brought back the funny! There are more than a few hilarious moments in this film with no lessening of the stakes/drama. The action is grand, the innocence of characters is maintained, the Dark side is Dark and the film is beautifully connected to the iconic mythology that George Lucas created all those years ago.

The new characters fit right in thanks, in great part, to the performances of Daisy Ridley, Oscar Isaac, Lupita N’Yongo (voice) and John Boyega. The only  weak link in the rookie category belongs to Adam Driver. He can’t quite carry the weight of the split persona his history requires, but its not unbelievable, just not as complete. As for the veterans? Peter Mayhew (Chewbacca) and Anthony Daniels (C-3PO) are exactly as you would hope, perfectly recapturing what has made them unforgettable the past 39 years. Carrie Fischer is…fine…I guess? And anything I say about Hamill will be a spoiler, so mum’s the word. But Harrison Ford utterly steals the movie. He is grizzled, funny, irreverent and heroic…sometimes in the same scene – in short, he is everything that made him a household name in 1977! Special mention to Andy Serkis, the Michael Jordan of MoCap performance! He is phenomenal, as always.

One of the most important aspects of the original Star Wars trilogy was that all the environments looked like somewhere we might live on our planet. This was a huge failing of the Prequels, with their 99% CGI fantasy, green-screen cutyscapes. This movie is shot beautifully and, like those original films, keeps it real throughout. And the special effects, while truly incredible, feel sparse and believable (even though they are neither). I would add that the 3D, which I am a huge proponent of, does not add much to the enjoyment of the film – so see it with or without.

Finally, and I can’t believe I’m saying this, John Williams score seems somehow restrained. The music infers emotion, rather than directing it, while lovingly utilizing the iconic themes of the past.

To sum up, the franchise is in great shape moving forward. The extension of the myth, and its new characters, should carry it for some time. And, most importantly, whether you are a Star Wars fanatic, average movie-goer, or Lucas-detractor, this is a really fun, exciting, and successful action flick. When the crowds die down (although I loved being in an audience that cheered every reference), go see it…in a theater!

This trailer spoils a couple reveals, but no major plot points…