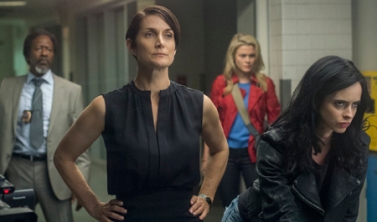 I was a big fan of the last Marvel offering from Netflix. “Daredevil” was smart, exciting and featured a brilliantly creepy bad guy in Vincent D’Onofrio. But “DD” utterly pales in comparison to their newest series, “Jessica Jones”, which is smarter, more exciting, exponentially more layered, and features the even more brilliantly creepy David Tennant as our (really, really evil) evil-doer. And, if, as a rule, you don’t really get in to the Marvel cacophony, this is absolutely for you. Super powers have VERY little to do with either the plot or the action. In fact, Jessica is more like a Marvel anti-hero…trading in a costume for a bottle of booze, while her tendency to lurk around the city in the middle of the night has nothing to do with saving the city.

This is a woman’s story on almost every level. There are at least four plots, all of which revolve around women, not one of whom requires saving by a man. Krysten Ritter is phenomenal as our hero. Spit and vinegar, but vulnerable and stunning. Rachael Taylor, who I thought was terribly weak in the Chicago-based series, “Crisis”, is brilliant in this. Carrie Anne-Moss also attains occasional brilliance, cold and calculating, and still earning our sympathy. The secondary male characters, while minimal, accomplish their tasks in creating a believable world…especially Eka Darkville…a revelation as a drug-addled neighbor.  But David Tennant makes “Jones” soar. I can’t say a thing without giving something away, so I’ll just say he’s worth giving it 13-hours all by himself…luckily you don’t have to.

It’s not perfect. There are scenes that repeat during the course of the series – noticeable only while binge-ing, but they repeat nonetheless. Sometimes the smarminess of the dialogue loses its edge. And the ending is ever-so-slightly unsatisfying. But this feels like film, not television, and it’s so very smart, complex and tense.

Yeah, “Jessica Jones” is my favorite streamer of the year – and a much better time investment than the mediocre “Man In the High Castle” – which I’ll review in the next couple days. Enjoy her with a bottle (or two) of inexpensive red and no need to wake up early the next day.