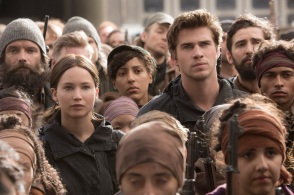 I’ve not yet seen a film, since I began this site, that was so uninspiring that I didn’t even want to write an opinion on it…until now. This is a dreadful film. Truly.

Listen, if you’re going to make the effort to rationalize the money-grab that is splitting a nothing film in to TWO nothing films, do us a favor and make them…I don’t know…professionally? With a script that doesn’t feel like a made-for-TV movie? And maybe give the actors SOMETHING to do for two hours other than look wistfully at each other. But hey…there has to be some action, right? Well, no, sadly. The action takes up about seven minutes of screen time. But don’t you worry, the score will more than make up for the lack of emotional tension in the room. #WorstScoreEver

I’ve read other critics state that they appreciated how this film shows us the cost of war, rather than the war itself. Okay, fine (although it is a love story interrupted by a bloody revolution brought about by blood-sport). But is that really the message of this movie? If that’s the case, this film puts the ‘mess’ back in message!  Even the ending…y’know, the ending we’ve been waiting on for the better part of FOUR FILMS…is incredibly obvious and underwhelming and BOOOOOORING.

In short, avoid at all costs…or, if you’re invested in seeing this thing out, wait until it’s on netflix…and you’re dish is snowed out…and you’ve already seen every other thing on netflix that’s ever been made…and the dog has already been walked…and your hot water is out…and you have insomnia. With any luck, the power will go out. Abysmal. Go see a real movie about real things instead, like “Spotlight” or “Suffragette”.

No trailer. I can’t be bothered.