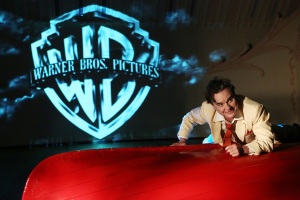 I’m not sure what to call this film…a documentary on the life of Orry-Kelly or a feature about a memoir told in memory BY Orry-Kelly. Instead of using talking heads and VO exclusively, Gillian Armstrong gives body to the voice of Kelly’s memoir. The result, while uneven, is pretty great.

The words and memories are amazing enough. This is a man who not only won three Oscars and costumed hundreds of movies in the Golden Age of Hollywood, but was personally affected by the advent of the Hollywood Production Code of 1934 (the censorship police). At the time, no one in the studio gave much notice to gay men or women. But post-Code, most actors had to shut the closet door and keep it locked. His memories of these changes are not only heart breaking, but act as a guage to see how far popular media has (or has not) come since then.

The clips from films that featured his creations are amazing, and the talking heads she does use are incredibly enlightening. And, overall, I enjoyed it immensely. It’s much more than a “That’s Entertainment,” since it also acts as a damning of the puritanical nature of the Code. But I felt the live action segments were too…smarmy and cutesy…and they took me out of the picture almost every time. Admittedly, this may be cultural bias…it’s very Australian (it is Gillian Armstrong, after all) and we’ve been weened here in the U.S. to watch our docs in a very specific format. Regardless of my minor quibbles (or maybe because of them), “Women He’s Undressed” is well worth your time at the theater or streaming!