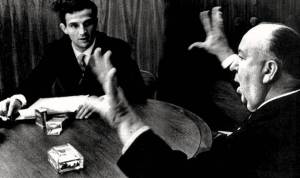 In 1962, a very young Francois Truffaut came to Hollywood and did a series of interviews with Alfred Hitchcock, the guts of which would later make up one of the earliest texts about the machinations of film-craft. It also marked the moment in which Hitchcock’s reputation changed from that of the fat man on TV, to the genius we consider him to be today. These recordings are the jumping off point for Mr. Jones’ new documentary, “Hitchcock/Truffaut”.

If you love the cinema, and can watch films with a critical (but loving) eye, you will love this film. It has most of what you would hope for: great clips of the two men’s various films, terrific interviews with some of the most well known and respected directors from all over the world, and, most importantly, the voices of these two great artists. All good, right?

Unfortunately, it is not imbued with any real soul. It feels more like a dissertation than a love letter to the evolution of the artform. Any emotional connection you have to the clips comes from your initial viewing experience of those films. Even the contents of the interviews revolve mostly around technical attributes. Which isn’t to say there aren’t fabulous insights about intention and tone from the likes of Bogdonavich, Scorsese, Linklater and others. But it feels more than a little like required viewing for a film appreciation class. Which is, to be fair, exactly what the book was. And that totally works for me, I just don’t think it will connect with the average documentary-lover.

Oh…and maybe interview ONE female director? I mean…even ONE?!

So if you love Hitchcock or Truffaut, and want to be educated for a couple hours, this is for you. Otherwise, just watch their movies.