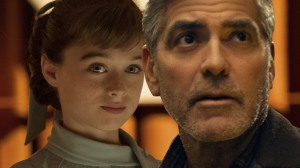 Considering I saw this film in a second-run theater, slightly out-of-focus, with terrible sound, seated in an incredibly uncomfortable chair, AND with someone possessing a harmonizing set of deviated septums sitting directly behind me, it’s a wonder I was able to even watch the film, let alone like it…but I did. It’s an absurd movie that I could see emanating from the mind of Terry Gilliam, but because it came from Brad Bird, it had more fun. Clooney turns off the charm to fantastic effect. He’s so easy to watch and he always lets us enjoy his screen-time, rather than make us work through it. His co-star, Britt Robertson, acquits herself well enough, but I wouldn’t say she’s good. But the movie really belongs to Raffey Cassidy. No spoilers, so nothing more about her performance. She’s just so multi-dimensional and we’ll be hearing a lot from her, I’m sure. And it’s always nice to see Hugh Laurie (whom we don’t see enough of). One of the big complaints in other reviews, was that the entire enterprise was merely a big commercial for Disney Theme Parks. But the “Tomorrowland” in this film refers to the 1964 World’s Fair in Flushing, New York (which I apparently visited while in my mom’s tum-tum), which lends a lovely historical grounding to the shenanigans – so it doesn’t really feel like a Mouse commercial at all, to me. The final act is kind of a mess, but I didn’t mind so much. It’s a film about reconnecting and, toward that end, I’ll forgive some creakiness. But, overall, I found “Tomorrowland” to be sweet and stunning. Just see it somewhere with a good projection system, good sound, good seats and good Ear/Nose/Throat professionals nearby.