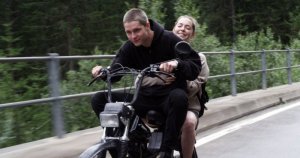 A 75-minute drama about a brother and sister who have returned to their parent’s chalet, after their deaths, to pack up their possessions. Meant to be a drama about the nature of sibling love and incestuous temptation, it works best as a travelogue for visiting the French Alps. This being his first feature, Mr. Perriard is an incredible photographer…just not a very good storyteller…yet. In other words, the biggest sin of the film is not incest…it’s boredom. The least accomplished film of the entire festival thus far.
Trailer here.

Somehow this collection was voted as one of the Best of the Fest offerings. Out of seven short films, only one is even worth mentioning…but that one is excellent. It is “Forever Over”, a German comedy revolving around the concept of “careful what you wish for,” is quite satisfying. That’s it. Nothing else.
Trailer here.

This was a collection of films much more interesting in concept than in execution. Six directors, utilizing 3D technologies, each made a 30-minute film about six iconic cultural buildings. One was incredible, one was very interesting, the rest, alas, were not quite good.
1) “The Berlin Philharmonic” – directed by Wim Wenders, Pardon the pun, but the most whimsical of the bunch, if a little lightweight, it is the best at showing us the uniqueness of the structure’s design. As they almost all do, the narrator takes on the role of the building…speaking in the first person. Not bad.
2) “National Library of Russia” – directed my Mchael Glawogger. This one is quite unique in that the the voice gives…er..voice to the books. Quite good.
3) “Norway’s Halden Prison” – directed by Michael madsen. Should’ve been better than it was, a VERY languid moving short from the perspective of the prison walls.
4) “The Salk Institute” directed by Robert Redford. Oy. Feels more like an industrial film for the work done there, with occasional snippets of audio from Salk and the architect, Kahn. And PLEASE, PLEASE, can we dispense with ever using Moby to score documentaries ever again. TEDIOUS!
5) “The Oslo Opera House” – directed by Margreth Olin. This is FABULOUS!!!! If you were lucky enough to see Wender’s “Pena” in 3D, then you’ll have a good idea why this is so effective. This is 30-minutes worth owning. Just fascinating, irreverent, stunning and affecting!
6) “Paris’ “Centre Pompidou” – directed by Karim Ainouz. Again…meh.
Trailer here.