This is a VERY dense and heady film 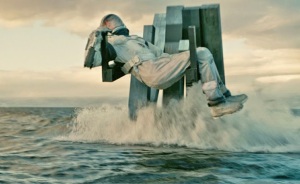 . While it has all the elements of an adventure/thriller, it is, like “Inception”, more a visual portrayal of the stuff that goes on inside Nolan’s mind. There are LOTS of talking head scenes about time and relativity and gravity, and the third act kinda jumps the shark a bit, but you forgive it quickly. Nolan also continues his awful habit of overwhelming dialogue with the score and sound effects – you WILL miss some crucial bits of conversations (I’ll be turning on the subtitles when it gets released for home viewing). The performances are fine, not exceptional…except for one uncredited performance which is, as usual, amazing (not giving it away – but the reveal of that actor will take you out of the movie for about 15 seconds). HOWEVER, it is also one of the most beautifully shot films you’ll EVER see. It makes you wonder what Kubrick might have done with “2001” or “2010” if he’d had Nolan’s budget. I THINK I really enjoyed it…especially the talking head stuff ’cause I’m a geek that way…but if you’re looking for a space joyride, think again, ’cause he’s gonna make you think a lot – even if much of it is gobbledygook. Oh…I really believe that if you’re going to give up three hours of your life to this film, you might as well see it in 70mm IMAX if you can (Navy Pier in Chicago) or any other IMAX. It does make a difference.